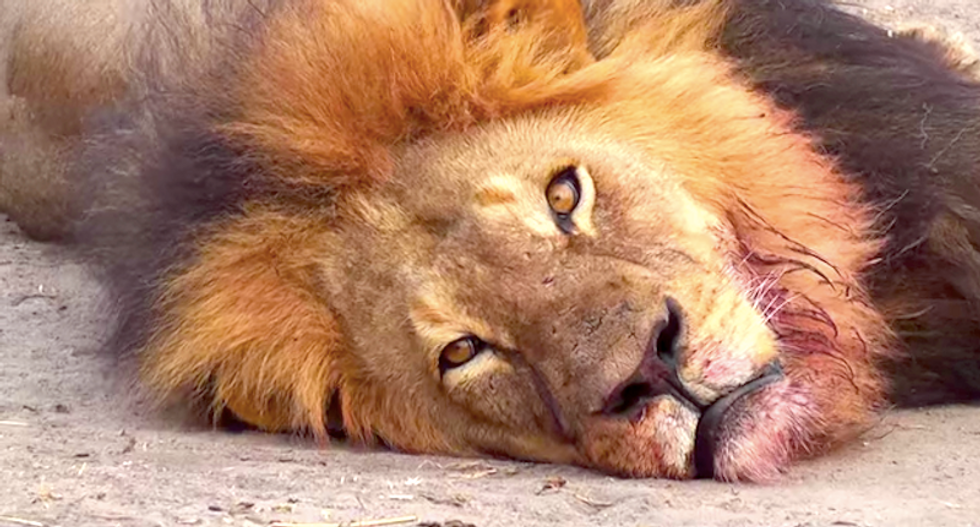 A Minnesota dentist has taken down his website after a British newspaper identified him as the American hunter who killed Zimbabwe's most famous lion.

Walter Palmer, a trophy hunter who operates River Bluffs Dental in Bloomington, is believed to have paid about $55,000 to bribe wildlife guards July 1 at Hwange National Park, reported The Telegraph.

The Zimbabwe Conservation Task Force confirmed that Palmer -- who has been previously fined for illegal hunts -- spotted Cecil the lion at night and tied a dead animal to his vehicle to lure the famed cat out of the park.

That tactic is known as "baiting" and is used by big-game hunters to justify their killings as legal.

Investigators said Palmer shot Cecil with a bow and arrow, and he and a companion found the wounded and suffering cat the following morning and killed it.

Palmer then removed the cat's skin and head and left its carcass near the outskirts of the park -- where hunting is prohibited.

"He never bothered anybody," said Johnny Rodrigues, the head of Zimbabwe Conservation Task Force. "He was one of the most beautiful animals to look at."

The 13-year-old big cat was known to the park's visitors and seemingly enjoyed human contact, according to reports.

The 55-year-old Palmer, of Eden Prairie, said the reports were inaccurate.

“Obviously, some things are being misreported," he said.

Palmer was assisted by professional hunter Theo Bronkhorst, who reported the "mistake" to park authorities the following day.

Bronkhorst and the landowner whose property borders the national park have each been charged with poaching in the case.

Photos of Palmer posing with large and exotic animals he has killed are widely shared on hunting blogs and other websites.

The father of two boasts that he has killed polar bears, bison, grizzly bears, cougars and many other animals.

He paid $45,000 in 2009 to legally shoot an elk as part of a fundraiser to establish a habitat for the animals.

Palmer, who learned to shoot at age 5, pleaded guilty in 2008 to making a false statement to federal wildlife officials about exactly where he killed a black bear during a guided hunt in Wisconsin and fined nearly $3,000 and sentenced to a year of probation.

He joked with reporters that his life revolved around shooting because he “doesn’t have a golf game.”

Palmer's dental practice has been deluged with harshly negative reviews on social media since he was identified as the lion's killer.

"How anyone could patronize the business of a supposed health care provider who is a cowardly taker of protected animals is beyond my comprehension," wrote Yelp user Stuart T. "This man is a killer. He breaks the law to kill. He pays desperate people cash to present him with helpless animals to be slaughtered who are proven again and again to be protected by national laws both here in America and around the world."

"In a civilized world a man like this, once exposed as a murderer and a law breaker, would be shunned, and his life ruined by his cold hearted actions," the Yelp reviewer added.