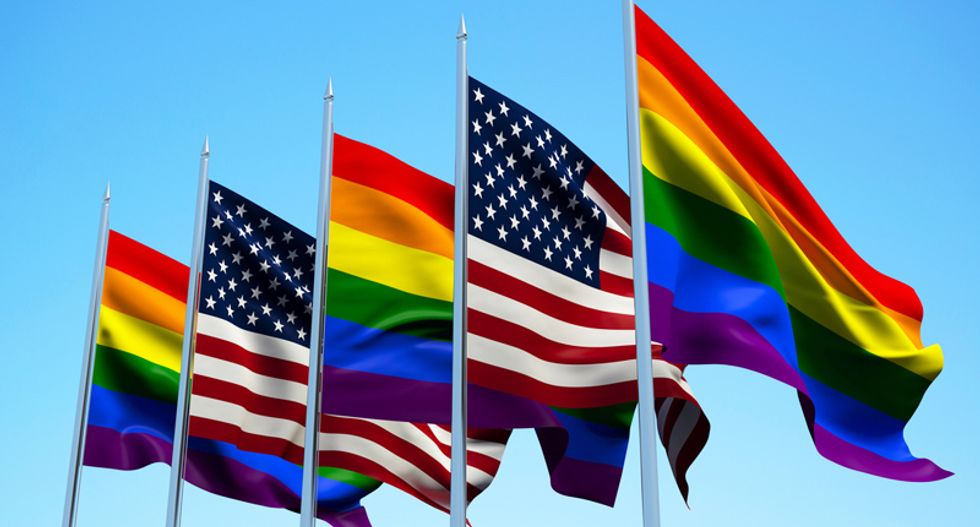 Stunned by the recent decision by the U.S. Supreme Court to legalize same-sex marriage, the commissioners of tiny Dent County in Missouri have voted unanimously to lower the flags in the public square to half-mast in mourning, reports the Riverfront Times.

Presiding Commissioner Darrell Skiles proposed the motion on Monday, with fellow commissioners Gary Larson and Dennis Purcell both agreeing to lower the flags  to protest what Skiles called,  “the U.S. high court’s stamp of approval of what God speaks of as an abomination.”

“It ain’t what our Bible tells us. It’s against God’s plan,” Commissioner Larson said, adding that it was "just one step backward."

All flags at the  Dent County Courthouse and the Judicial Building will be lowered on the 26th of each month for one year in remembrance of the Supreme Court's ruling, handed down on June 26th of this year.

Salem resident Alex Sellers was dismayed by the move, starting an online petition calling on the commissioners to reverse this decision.

“The act of lowering the American flag from full height has long been a way for communities to mourn local and national tragedies. To compare the Supreme Court ruling on homosexual marriage rights to those tragedies in any way is an insult to both the tragedies that have been previously mourned in this manner and the basic principles of government under which the United States operates that led to this court decision, not to mention those personally affected by the ruling,” Sellers wrote.

According to Sellers, when he first heard about the decision he thought it was a joke and now he wants people to know that not all citizens of Dent County agree.

“Even if this doesn’t change their minds, I wanted it out there that we’re not all a bunch of closed-minded individuals mourning the Supreme Court decision,” Sellers said. “This is not just a backward place. There’s another side of this.”

Commissioner Larson, who runs an auto-body repair shop in Salem, said the board checked with a city attorney and were told they were well within their rights to make the move.

According to Dent County Recorder of Deeds Cindy Ard, only one couple in the county of over 15,000 has applied for a same sex marriage license.

Record Ernst & Young fine in US for cheating on ethics exams

US authorities fined Ernst & Young a record $100 million over cheating on accounting ethics exams that the firm initially covered up from regulators, officials announced Tuesday.

From 2017 to 2021, 49 audit professionals with the "Big Four" firm sent or received answer keys to Certified Public Accountant (CPA) ethics exams, according to a Securities and Exchange Commission order.