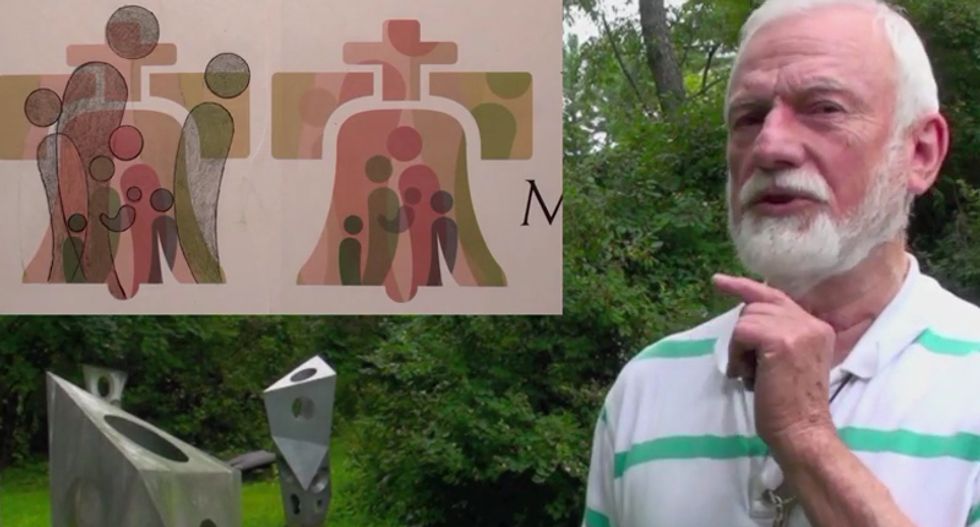 An online pastor, who bills himself as the "Third Eagle of the Apocalypse," warns that Pope Francis is  promoting the "gay agenda" by using hidden imagery of gay men having sex in the logo being used to advertise his upcoming visit to Philadelphia.

William Tapley, who also calls himself the "Co-prophet of the End Times," explains that the pope himself is actually a "false prophet" who disguises himself as an angel.

Noting the pontiff's upcoming visit to Philadelphia, Tapley explains that the logo used for the visit contains images of men having "gay sex."

"At first glance you might think that this is a family logo, promoting a normal marriage between a man and a women," he explained. "However, there is a hidden agenda in this logo to promote the gay agenda. That is because this image shows two men  and their relationship is a sexual one and not one of holy matrimony."

Noting that all of the stylized characters in the logo are similar in form -- as opposed to male and female characters, with the female wearing a dress, as seen on bathroom signs -- Tapley says it is obvious they are all men.

"If you take a closer look at this image you will see that the two figures are in a masculine shape," he continued. "They are wider at the shoulders, the upper part of the body, and they taper down just like a man."

Tapley goes on to note that not only are the children in the design male, but that there are actually seven figures in the logo -- ostensibly celebrating the family -- and that all of them are males with only one bent in a "submissive or female" position.

Of particular interest to Tapley is what appears to be a baby being held by the supposed female character which he characterizes as a "male phallus," because a same-sex couple could not have a child.

Watch the video below, uploaded to YouTube by William Tapley: