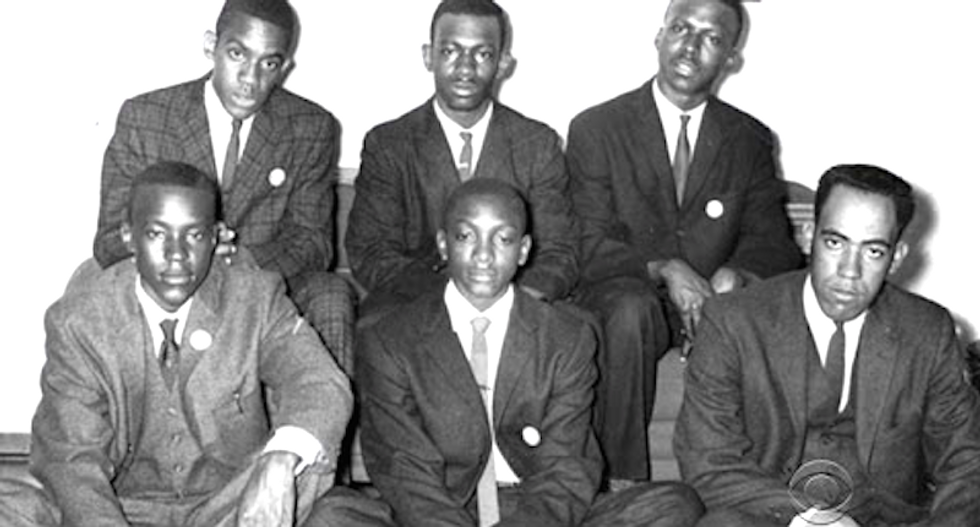 A peculiar historical symmetry exists between South Carolina’s decision to raise the Confederate flag in 1961 and the state’s overnight vote Thursday to bring it down.

The flag was first hoisted over the Statehouse on April 11, 1961, as part of the centennial celebration of the firing on Fort Sumter, which opened the Civil War.

The flag was flown at the request of Aiken Rep. John A. May, who introduced a resolution during the next legislative session to display the flag over the Statehouse, and lawmakers approved his measure March 16, 1962 – after the flag had remained flying for nearly a year.

Just weeks before the Confederate battle flag was first hoisted, 10 black students from Friendship Junior College were arrested on Jan. 31, 1961, and convicted the following day after they refused to leave an all-white lunch counter in Rock Hill.

Nine of those students, who became known as the Friendship Nine, revolutionized the civil rights movement by refusing bail.

“The obvious advantage of 'jail, no bail' was that it reversed the financial burden of protest, costing the demonstrators no cash while obligating the white authorities to pay for jail space and food,” wrote Taylor Branch in the Pulitzer Prize-winning “Parting the Waters.” “The obvious disadvantage was that staying in jail represented a quantum leap in commitment above the old barrier of arrest, lock-up and bail-out.”

The students spent 30 days doing hard labor at the York County Prison Farm, and other demonstrators followed their example at white-only businesses throughout the south.

A York County judge tossed out the trespassing convictions against the former students – eight of whom are still living – on Jan. 28, 2015, saying the men, now in their 70s, should never have been charged in the first place.

“We cannot rewrite history, but we can right history,” said Judge John C. Hayes III. “Now, as to the Friendship Nine, is the time and opportunity to do so. Now is the time to recognize that justice is not temporal, but is the same yesterday, today and tomorrow.”

The admitted gunman, 21-year-old Dylann Roof, displayed a Confederate flag license plate on his getaway car and posed for numerous photos holding the same battle flag that flew above the Statehouse grounds as his victims’ funeral processions passed.

Gov. Nikki Haley ordered the state and U.S. flags lowered to half-mast to honor the victims, but only the General Assembly has the authority to alter the Confederate flag as part of a 2000 agreement to move it to a war memorial on the Statehouse grounds.

Public sentiment quickly turned against the Confederate flag, which was removed from states across the South and by retailers such as Walmart and Amazon.

The South Carolina House voted 94-20 about 1 a.m. Thursday, after nearly 13 hours of debate, after the governor called a special session and asked for the flag’s removal.

The approved bill called for the flag to be taken down 54 years after it was raised during the civil rights movement and moved to a relic room at a military museum in the state capital.

Watch this video report about the Friendship Nine posted online by CBS News: