Scott Walker calls for more militaristic America: US needs to 'put steel in the face of our enemies' 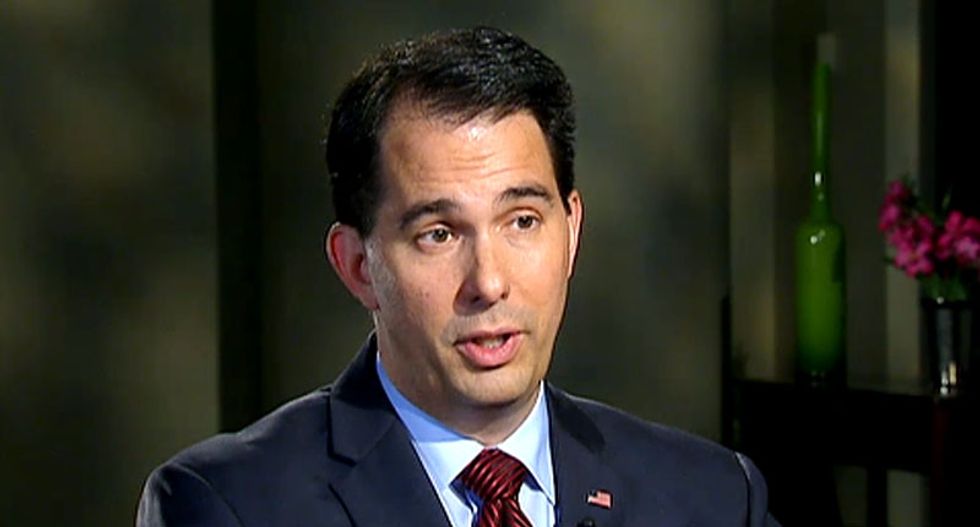 Republican presidential candidate Scott Walker had a steep learning curve on foreign policy after some early off-key statements. Now an eager student of global affairs, is staking out positions that play well to conservatives but lack a lot of nuance.

This was clear from a weekend bus tour the Wisconsin governor took across Iowa and earlier stops in South Carolina as part of the campaign swing he took in the week after becoming the 15th candidate to seek the 2016 Republican presidential nomination.

He saw no need for diplomatic niceties in response to the Iran nuclear deal that President Barack Obama negotiated with Tehran: He would terminate it as soon as possible and persuade U.S. allies to join Washington in imposing more crippling economic sanctions on Tehran.

"This is not a country we should be doing business with," he said in Davenport, Iowa, reminding the crowd of Iran's holding of 52 American hostages in 1979. "This is one of the leading state sponsors of terrorism."

Walker would also be more confrontational with both Russia over its aggression against Ukraine and against China, for the territorial pressures Beijing is putting on U.S. allies in the South China Sea.

He would dramatically increase U.S. military spending after budget cuts that military officials have complained about.

"The United States needs a foreign policy that puts steel in the face of our enemies," Walker says.

This kind of talk is welcome to conservatives who dominate the Republican Party in Iowa and who may award him with a victory in the Iowa caucuses on Feb. 1, the first nominating contest on the road to the November 2016 election.

Walker leads in Iowa and needs a win to gain momentum in the contests that follow like Feb. 9 in New Hampshire, where his standing is not as strong.

"What he said is exactly what we need to do," said Judy Jamison of Bettendorf, after hearing Walker speak in Davenport. "He's shown in Wisconsin that he's not going to be intimidated."

Walker's position on Iran is a rejection of the White House view that it is better to take the deal available now because the sanctions regime will crumble anyway as many governments want to allow companies to resume business deals with Tehran.

One of Walker's rivals, former Florida Governor Jeb Bush, criticized the Wisconsin governor's position that he would immediately jettison the deal, suggesting it lacked maturity. He did not mention Walker by name but his intention was clear.

"One thing I won't do is just say as a candidate: 'I'm just going to tear up the agreement on the first day.' That sounds great, but maybe you ought to check in with your allies first," Bush told reporters in Carson City, Nevada, on Friday.

Such talk prompted a rare response from the Walker team to Bush, a possible prelude to a clash over the issue when the candidates have their first debate on Aug. 6 in Cleveland.

The Walker campaign blasted out a statement from foreign policy adviser Robert C. O'Brien that rejected Bush's view without mentioning him by name.

"We don’t need more information, we don’t need to wait to confirm the next Secretary of State, we need decisive leadership and we need it now. This won’t be easy, but when America leads, and has a strong president with clear priorities who believes in American strength, the rest of the world will follow," O'Brien said.

Walker, along with Bush and Senator Marco Rubio of Florida, are among the front-runners for the nomination.

When Republicans think of Walker, they generally refer to his victory over unions as governor of Wisconsin. They do not put him in the category of a strategic foreign policy thinker.

Walker's foreign policy miscues included a statement earlier this year that his fight against the unions in Wisconsin had girded him for the battle against Islamic State. He also said the biggest national security decision by 1980s President Ronald Reagan - who is credited with adopting policies that helped win the Cold War - was his move to fire air traffic controllers at U.S. airports.

All this raised eyebrows among the Republican foreign policy professional class in Washington. Walker, 47, took steps to beef up his foreign policy knowledge.

He now gets daily briefings about what is going on abroad. His national security adviser is Mike Gallagher, a Middle East expert who had worked for Tennessee Republican Senator Bob Corker, who is one of the leading voices in the party on national security. Former Senator Jim Talent of Missouri is also an adviser on international relations.

He has adopted some of the more hawkish views in the Republican Party.

Republican pollster Frank Luntz, after listening to Walker at a town hall event in Cedar Rapids, placed Walker's views on national security in the middle of conservative thinking among presidential candidates. He said Walker is between Senator Rand Paul of Kentucky, who would limit U.S. engagement overseas, and Senator Lindsey Graham of South Carolina, who favors more U.S. intervention.

"He's dead center," Luntz told Reuters. "That's what the public is thinking right now. That’s what Republicans are thinking. There is a general fear among Americans that we are weaker today than we were five years ago, and we’re going to be weaker still."