The extraordinary life of Whistler's mother

Many are familiar with James McNeill Whistler’s portrait of his mother – officially titled Arrangement in Grey and Black, No. 1 – which is being exhibited this summer, starting July 4, at the Clark Art Institute in Williamstown, Massachusetts.

Given the picture’s iconic status as a symbol of motherhood, many also believe that they can guess the character, personality and life experiences of the quiet, seemingly frail, little woman sitting in that chair. You might opine that she led an isolated or sheltered life, or spent her days baking cookies.

But you’d be wrong. When researching my biography of her artist son, I became so fascinated by the part she played in his life and career – and so impressed by her resilience and intelligence – that I decided to write her biography, too. The more I’ve uncovered and read, the more I’ve discovered that Whistler’s mother led no ordinary life, and ended up shattering 19th-century established roles for American wives and mothers.

Anna Matilda (McNeill) Whistler (1804–1881) may have been a quiet, diminutive woman, but she was a mighty force in the lives of those around her.

She reared a renowned artist, an acclaimed physician, a prosperous businessman and a daughter who married into the English upper class.

A shrewd observer of the world, Anna encountered and interacted with an astonishing array of people from nearly every walk of life, whether it was American farmers and Russian peasants or Robert E Lee and Giuseppe Mazzini. She met with diplomats, businessmen, manufacturers, inventors, religious leaders, politicians, journalists, soldiers and, of course, artists.

Naturally, Anna was defined, to a large extent, by her times, and she did assume many of the societal roles prescribed for 19th-century, middle-class, American women.

She was pious and dutiful, with no higher ambition early in life than to marry the man she adored and maintain a well-ordered, economical Christian household, at once a refuge for her husband and a sanctuary for their children.

Anna certainly achieved those ends. As a steadfast wife and mother to eight children, three of them stepchildren, she initially met every expectation of the 19th century’s “cult of true womanhood,” the idea that women should strive for “piety, purity, domesticity and submissiveness.”

But there were complicated layers to her character and upbringing.

In a way, Anna was a daughter of the slave-holding South. She spent the first years of her life in North Carolina, where she was raised by a physician father and a beautiful, cultured mother. Both a plantation-owning uncle and Anna’s brother had children with black women. In the case of her uncle, this led to a widely publicized legal battle, in which family members, including Anna, challenged the terms of his will. He had bequeathed, it seems, the larger part of his enormous wealth to a black wife. 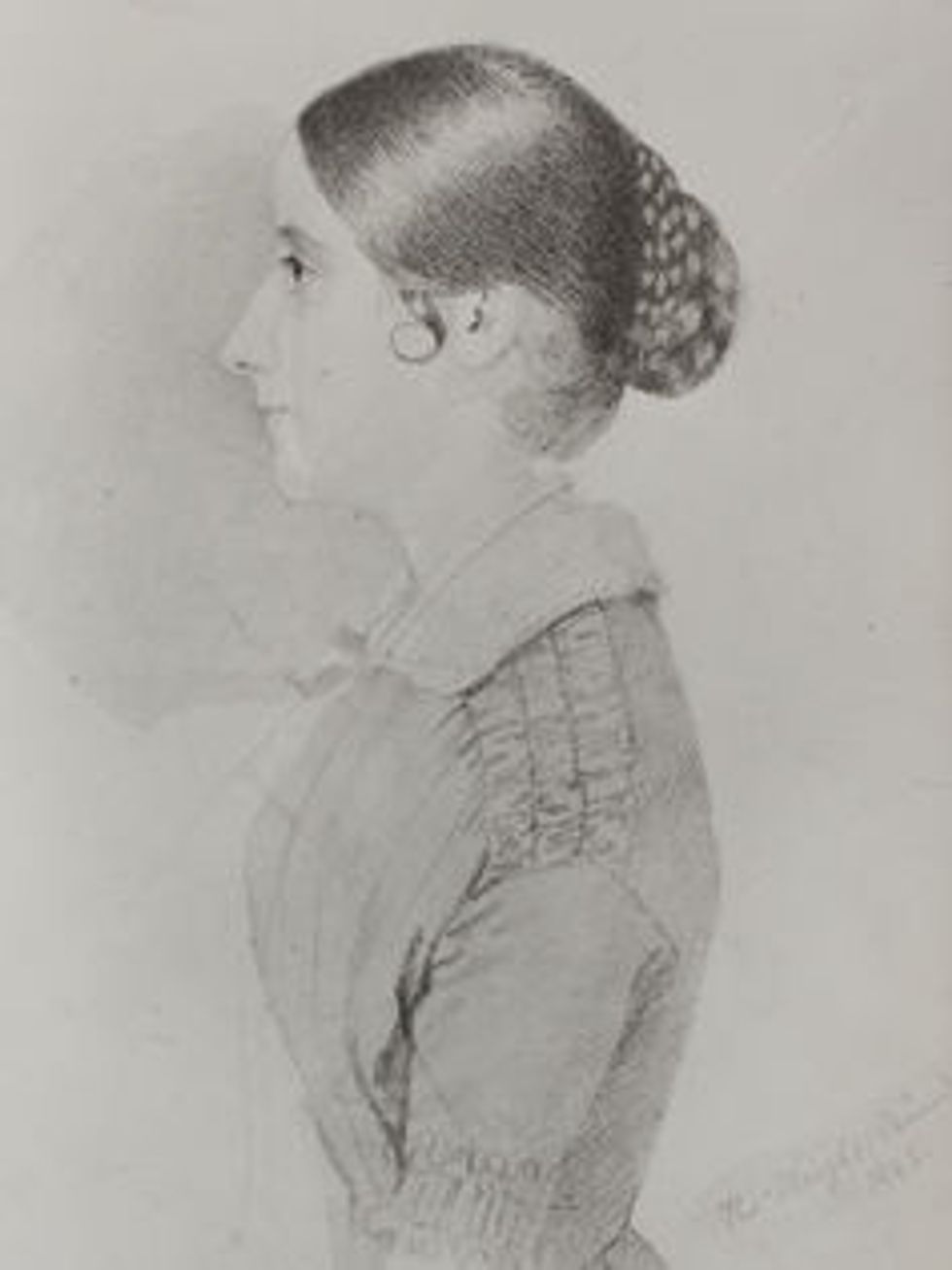 A portrait of Anna Whistler when she was roughly 20 years old.

The Whistler Collection, the University of Glasgow Special Collections.

However, Anna’s family moved to Brooklyn when she was 10, and it was in that prosperous northern village that she grew to maturity.

She completed the bulk of her formal education in Brooklyn and became more firmly grounded in the teaching of the Episcopal Church. Her city-hopping continued at 17 when, following the death of her father, Anna and her mother lived variously in New York, Baltimore and Georgetown. In her mid-20s, she spent more than a year in Great Britain, where she had two half-sisters. It was the first of 11 Atlantic crossings she made during her life.

By the time she married George Washington Whistler in 1831, her travels and several residences had not only exposed Anna to a variety of social and cultural environments, but they had also taught her perseverance, patience and independence – qualities she would come to depend on.

Naturally, she had her faults. She was keenly class-conscious, and she could be overly protective. Had her children not inherited her self-reliance, she might have smothered them. Even her strengths, especially her independence, could work against her.

As a sister-in-law complained, “Anna is so unshakable that sometimes I could shake her. And the way she will stand out even against people whose opinion mean the most to her. One can’t help admiring it but it seems so – well, so old!”

Thirteen years into her marriage, and after living in another four homes in three states, she packed up her family and moved to St Petersburg, Russia.

Her world-renowned engineer husband had been hired by Czar Nicholas I to build a railroad from St Petersburg to Moscow. Six years later, when her husband died of cholera, Anna returned to America to rear their two remaining adolescent children on her own.

From a position of relative wealth and status in Russia, she found herself almost impoverished; without her husband’s income, she was forced to depend on her modest savings. Other women might have retreated into a quiet, sedentary life, but that wasn’t in Anna’s nature.

By the 1850s, the lines between private and public lives, domestic and public spheres, were becoming blurred for middle-class women. The cult of true womanhood was giving way to a bolder, more visible, nascent modern woman.

Some women became public figures. Others, like Anna, exploited the same opportunities but chose to work behind the scenes. Being the widow of a famous and respected husband helped: it gave her an identity and credibility she would have otherwise lacked.

For instance, it allowed her to coax Robert E Lee, when he was superintendent at West Point, into giving her cadet son James a weekend pass. She later put her second son, William, through medical school and acted as unofficial business manager in America for James, who, upon being dismissed from West Point, had gone to Paris and London to become an artist. Anna promoted his work, sought commissions and acted as an adviser.

Then came the American Civil War, which presented Anna with a dilemma: on the one hand, she was a southern woman who still had relatives in the Confederate states. Further complicating matters, her youngest son William had married a southern cousin, and had enlisted as a surgeon in the Confederate army.

Yet Anna’s late husband had been a profoundly patriotic graduate of West Point who would have served the Union. So with failing eyesight and her children dispersed throughout the world, Anna slipped off to England, in a way absolving herself from having to pick a side.

In London, a masterpiece emerges

Quickly adapting to yet another upheaval, Anna directed her artist son’s London household, where she lived for most of the next 11 years. It was during this time that, in 1871, she sat for her famous portrait. 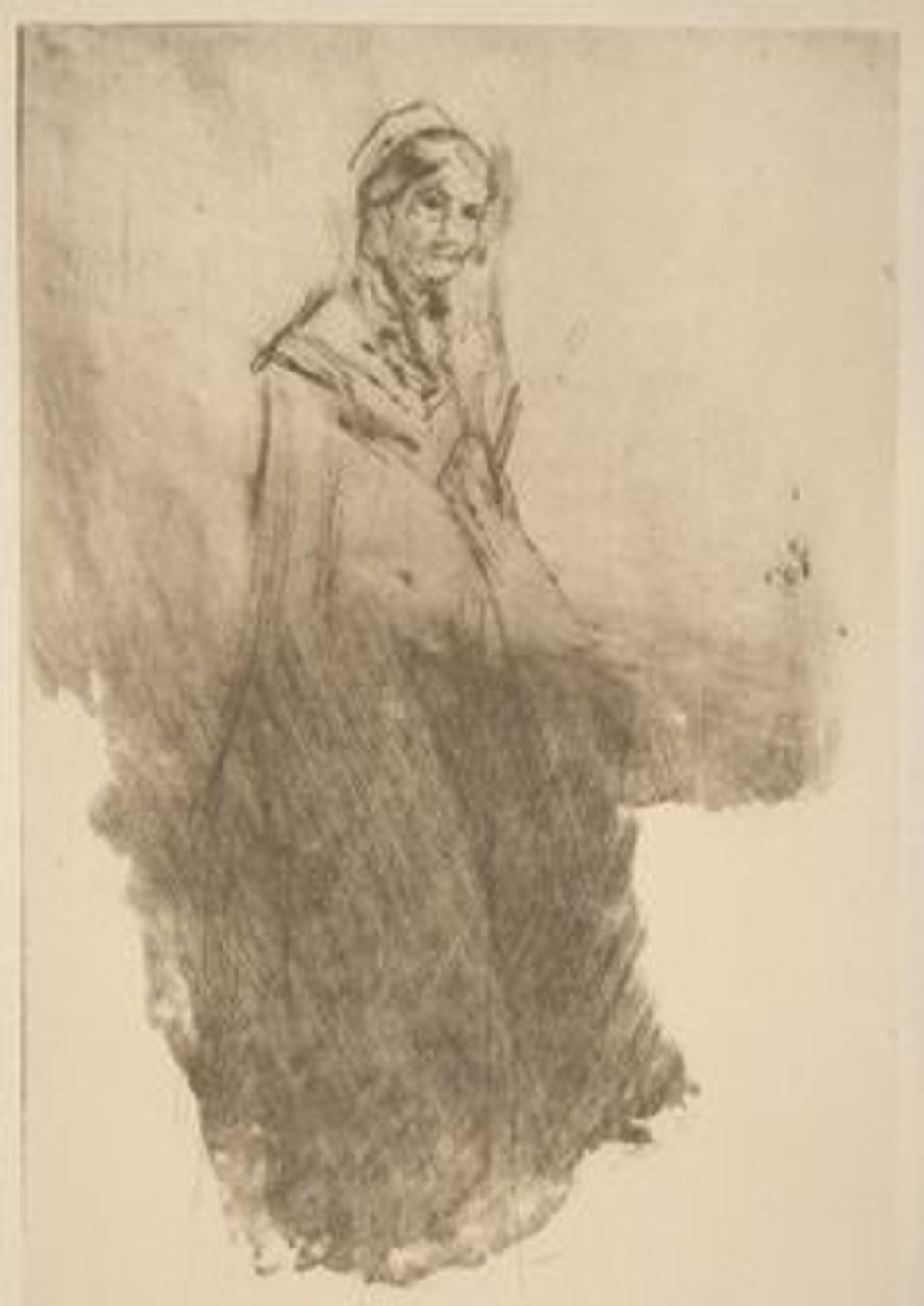 James Whistler’s sketch of the originally proposed pose for his Arrangement in Grey and Black, No. 2. Anna decided she wouldn’t be able to stand long enough in this pose.

The Whistler Collection, the University of Glasgow Special Collections.

Whistler had experienced one of his periodic bouts of self-doubt in the last half of the 1860s. Reconsidering the purpose of art, he experimented with new painting techniques, limiting his range of colors and spreading his paint more thinly and smoothly. He rejected the age-old assumption that a painting should tell a story or convey a moral lesson; beauty was all that mattered, he now said, art purely for art’s sake.

He shunned narrative titles for his paintings, describing them, instead, in musical terms or according to their dominant colors. The results were his unique series of nocturnes and his Arrangements in Grey and Black. The portrait of his mother was initially considered an unorthodox, even eccentric painting, but it went on to solidify James Whistler’s fame.

Anna Whistler passed away in 1881, although in one sense, Anna never really died.

Some would argue that Whistler’s Mother has become even better known than the artist himself. And it’s perhaps fitting that, like the painting’s globetrotting subject, the portrait continues to travel the world, hopping from state to state, from continent to continent.

Whistler’s Mother will be exhibited at the Clark Institute of Art in Williamstown, Massachusetts from July 4 to September 27.

Daniel E Sutherland is Distinguished Professor of History at University of Arkansas.