WATCH: Gay Kentucky couple insulted and abused by county workers when they ask for a marriage license 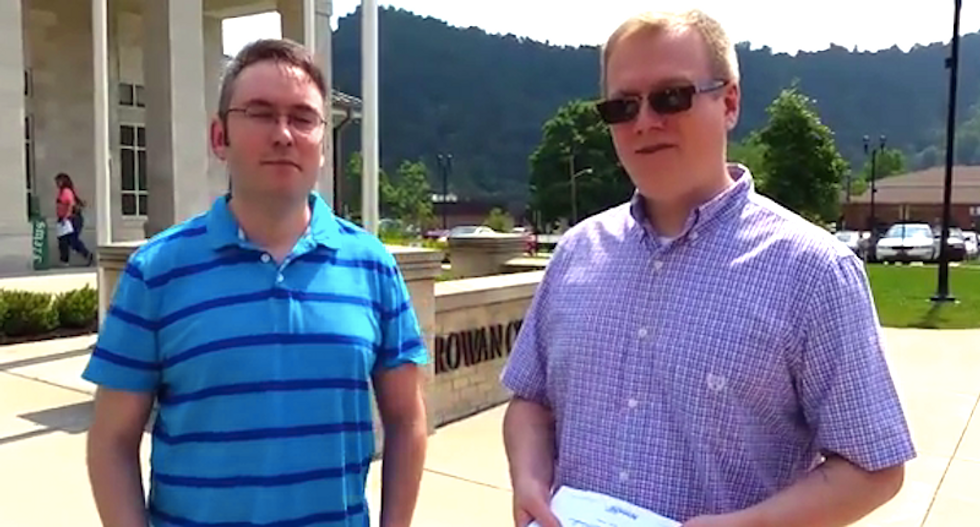 A gay Kentucky couple met a hostile greeting when they attempted to request a marriage license in the county where they’ve lived for 10 years.

David V. Moore and David Ermold went Tuesday with a videographer friend to the courthouse in Rowan County to ask County Clerk Kim Davis to issue a marriage license.

Davis has vowed never to issue a marriage license to a same-sex couple and has claimed she has the religious freedom to ignore the U.S. Supreme Court ruling and orders from the governor and state attorney general.

“It’s a deep-rooted conviction; my conscience won’t allow me to do that,” Davis said. “It goes against everything I hold dear, everything sacred in my life.”

The ACLU of Kentucky filed a lawsuit last week against Davis -- who is among just two of the state's 120 county clerks to refuse to follow the law -- on behalf of a lesbian couple and a gay couple who were also turned away.

Ermold and Moore recorded video of their experience at the Rowan County clerk’s office.

The couple stands awkwardly in the clerk’s office while another resident handles a personal matter until an office employee called out a question about five minutes after their arrival.

“Don’t you girls have anything better to do?” a woman asks the men and their friend.

The videographer says she had taken off work to help her friends, and the employee complains that some people had to work.

“Are you all wanting marriage license?” a male employee asks, and the couple said they were. “OK, we do not sell marriage license in this county. You can go to our surrounding counties – they’ll be more than happy to assist you.”

Ermold repeatedly tells the man that they preferred to wait and speak to a deputy clerk, one on one, rather than broadcast their business to the entire office.

“I didn’t know that what we were doing is the public’s business, all around here,” he says.

A man and woman arrive and walk obliviously past the couple, and a second female employee warns the group that she will call the police if they don’t stop recording video.

An employee offers to help the woman who had just arrived, and she seems confused as the deputy clerks argue with Moore and Ermold about whether they are next in line.

“I can’t help you – Kim will help you,” a female employee says, and Moore asks to speak with Davis.

“Your business has been taken care of,” the male employee says, and adds that Davis is too busy to speak to them.

Moore asks if anyone in the office can give them an application or help them obtain a marriage license.

Davis at that point comes up to the counter to speak with the woman who had come in after them, the videographer says but keeps the camera pointed toward her friends.

A man and woman walk in at that point with cell phones recording video, and the man – who is wearing a T-shirt promoting a petition drive that reads “I support Kim” – says, “defense of ignorance.”

A sheriff’s deputy walks in moments later and approaches the counter, and Moore and Ermold follow him as the other man and woman continue recording video of the couple’s videographer friend.

The couple asks an employee to speak directly with Davis, and she says they may briefly speak with the county clerk if they wait.

Ermold tells the employee that he has a letter from Gov. Steve Beshear ordering all county clerks to issue marriage licenses to same-sex couples, and he says he also brought the Supreme Court ruling in Obergefell v. Hodges.

“We know what it reads, sir, and we’re not issuing any licenses,” the woman says. “You need to talk to her. You can go to any other county and get your marriage license. We’re just not doing it at this time – not even for other people.”

Ermold points out that they own property, pay taxes and have lived in Rowan County for a decade.

“It’s her choice,” the employee objects, and Ermold reminds her that Davis does not have that right as a paid public employee who is sworn to uphold the law. “We have the right, too, as a Christian, she feels, not to do this.”

The employee asks the couple to have a seat and wait to speak with Davis, and they agree to do so.

Davis finally comes up to the counter to speak with them more than 10 minutes after they arrived, and she asks them to not put away the video recording device.

The videographer reminds the county clerk they have a right to record video, and the male employee interjects.

“It’s also common courtesy not to shove it in people’s faces,” he says, and Moore agrees to turn off the camera.

The couple did not obtain a marriage license from Davis.