Bill Maher rips Big Money's political influence: For that kind of cash, they should get to hunt candidates 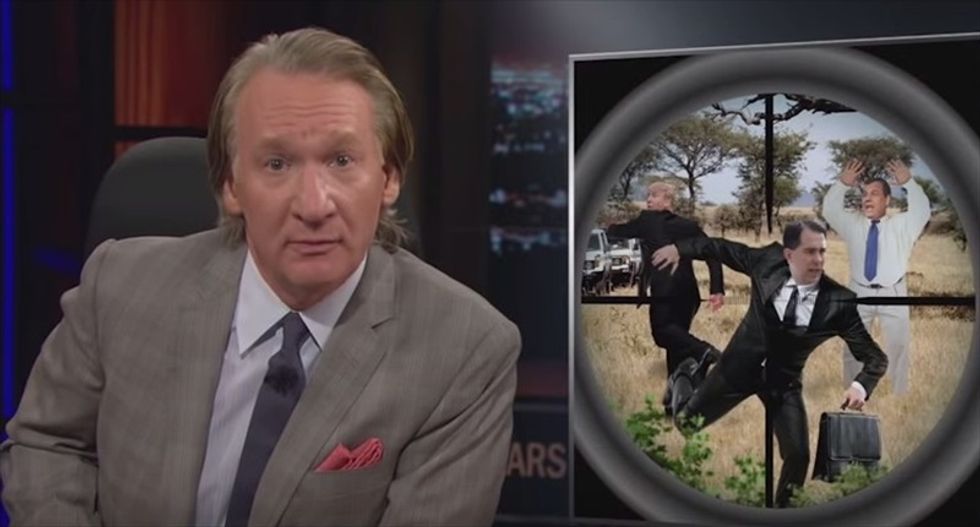 Bill Maher closed Real Time on Friday by tearing into not only Minnesota dentist Walter Palmer, but what he described as an American obsession with showing other people how rich you are.

Palmer was the subject of widespread criticism after posting a picture of himself after killing Cecil, a widely-known lion who became a tourist attraction in Zimbabwe.

Maher criticized Palmer for emphasizing the "legality" of his kill, arguing that rich people are often in a position to buy legislators so that they can produce laws to cover their activities.

"Like our elections now," Maher argued. "More than half the money given to presidential candidates so far has come from just 400 families. Perfectly legal. But you know, for that kind of money, the rich shouldn't just get to tell politicians what to do -- I think they should get to hunt them."

A "trophy candidate," he said, would be the perfect compliment to a trophy kill, or trophy wife.

"What could be better than a Republican candidate's head on your wall?" he asked. "Scott Walker's eyes already look like cheap taxidermy, and Chris Christie's leg would make a lovely umbrella stand. And if that sounds wrong, we'll make a law that says it's legal."

While he was sure that the rich have always been greedy and selfish, Maher argued, rich people today are on another level of self-absorption. He also scoffed at the fact that Palmer was able to afford the hunt from "scraping plaque off peoples' teeth."

"If you're a dentist itching to travel to another continent to kill something, next time grow some b*lls, go to Syria and take on ISIS," he suggested.

Maher also went after Steve Yuhas, the conservative radio host who complained, "We're not all equal when it comes to water" in response to an edict from California Gov. Jerry Brown that homeowners should cut down on their water use in response to the state's drought. Yuhas also fretted about "property with brown lawns" and "golf on brown courses."

"The only brown thing allowed on Steve's golf course is the caddies," Maher quipped, before showing the audience a picture of his own bare lawn and asking, "Who gives a sh*t?"