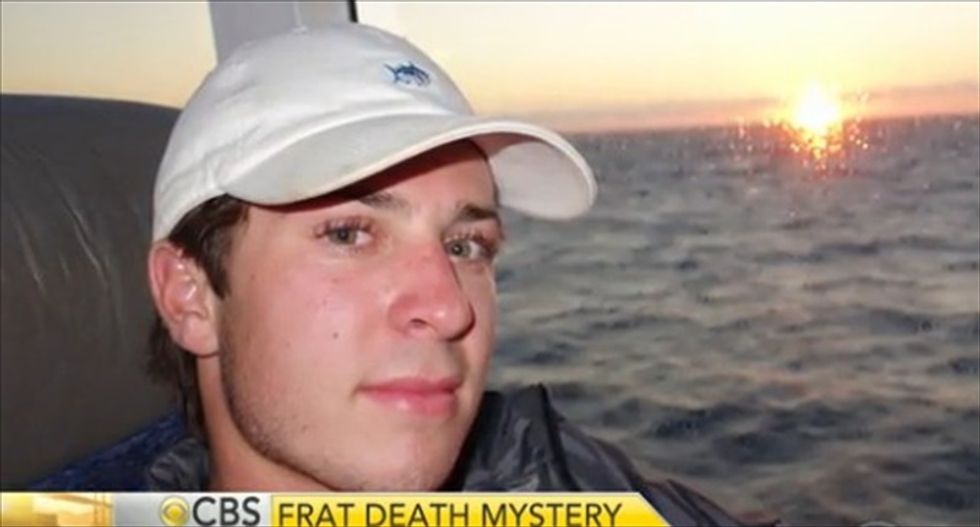 Family members of a Clemson University fraternity member who died after plunging headfirst off a bridge say new information shows he was "forced" to balance on the bridge's railing in the moments before he died, according to a report Thursday in the Greenville News.

Tucker Hipps, a 19-year-old student, fell from a highway bridge last year during a pre-dawn run with Sigma Phi Epsilon, the fraternity he was pledging.

His body was found by police in September beneath the bridge, which spans a lake near the campus, after members of the fraternity reported to police that Hipps never returned from the run.

The family filed two civil lawsuits against the university, the fraterntiy and three members in March seeking $25 million each and alleging that Hipps died as a result of a confrontation with a fraternity member over breakfast food he was told to bring that morning.

The defendants have said Hipps' own negligence caused his death.

But the family is now seeking to update the lawsuit with new information from a witness who alleges Hipps, a pledge at the time, "was forced to walk the rail, slipped from the railing and caught the railing under his arms," according to the Greenville News.

Hipps then tried to climb back up with no help, but lost his grip and fell, striking his head on the rocks in shallow water below, according to the report.

Attorneys representing the family could not be reached by Reuters to comment on the report. A judge will likely schedule a hearing on the issue for October, according to the News report.

The suits allege the fraternity had a long tradition of "requiring, pressuring, encouraging and forcing" pledge members to jump off bridges over the lake and swim to shore.

Hipps was not under the influence of any substances, according to a toxicology report. He died of blunt force trauma from a head-first fall onto rocks in shallow water, a coroner's report showed.

Watch a report on the lawsuit, as aired on CBS News, below.