Duggar sisters and mom appear on TLC special about sex abuse: 'It shouldn't be a taboo subject' 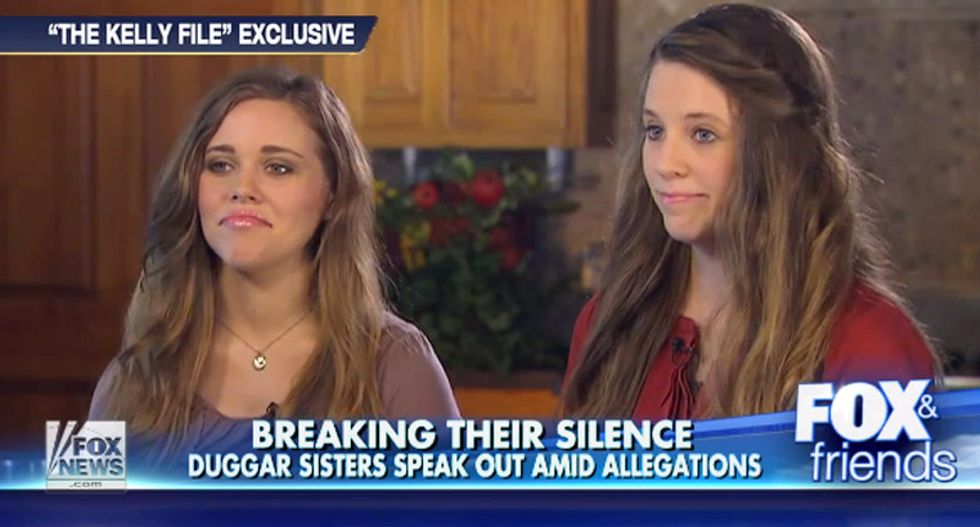 Two of Josh Duggar's molestation victims and their mother took part in a television special on sexual abuse on the same network that canceled their popular reality show.

Jessa Seewald and Jill Dillard, who admitted in May during a Fox News interview that their brother had molested them, appeared Sunday night, along with their mother, Michelle Duggar, on TLC's "Breaking the Silence."

"I was so glad that my girls and I were able to do this together and that we could just be a support and encouragement to each other to be able to gain more information about this important topic," Michelle Duggar said.

The 27-year-old Josh Duggar, who resigned from his job with the anti-LGBT Family Research Council after the decade-old sex abuse revelations were reported, entered a long-term rehabilitation facility last week after admitting to cheating on his wife.

TLC pulled the family's "19 Kids and Counting" from its schedule after the sex abuse and Jim Bob and Michelle Duggar's response was reported.

"It's amazing to understand that there are so many people that deal with this exact same thing in their own families," said the 24-year-old Dillard. "So just being educated is very good."

Her younger sister agreed that families should discuss sex abuse.

"I feel like this should be a discussion people are having, even regularly," said the 22-year-old Seewald. "I think that it shouldn't be a taboo subject, that we should be bringing awareness to child sexual abuse and talking about this."

Seewald, who is expecting her first child in November, said the televised seminar had taught her "things I can do to be more aware, things I can do to set up boundaries and safeguards for my child and children, hopefully, in the future."

Other sex abuse survivors, including actress Teri Hatcher, shared their own stories during the one-hour program, which was conducted with help from RAINN (Rape, Abuse & Incest National Network) and and the abuse prevention group Darkness to Light.

The Duggars have reportedly pitched a spinoff from the program that would show them providing Christian counseling to victims of childhood sex abuse.

Watch this video about a sexual abuse prevention law from the "Breaking the Silence" program: