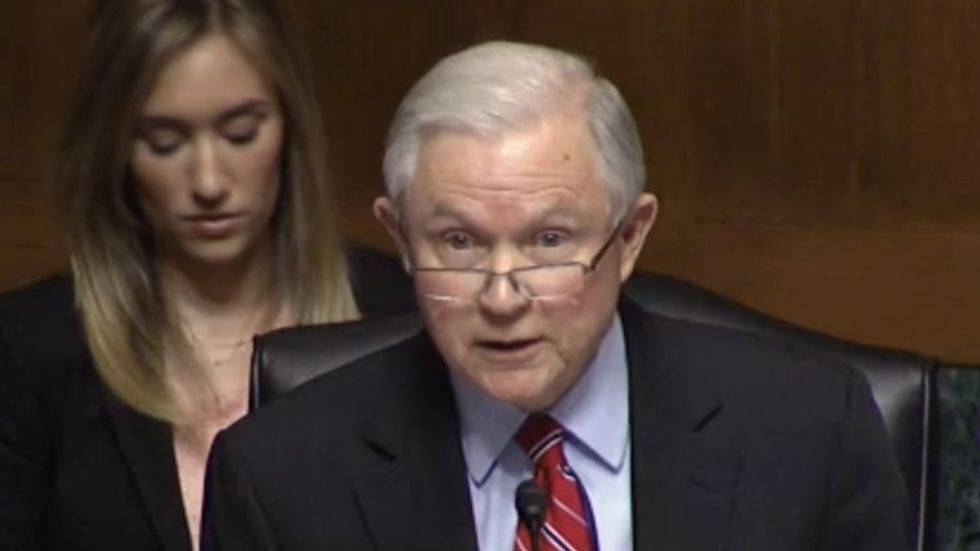 Last week, Donald Trump spoke to a large crowd in Mobile, Alabama, at a rally that featured Senator Jeff Sessions (R-AL). At the rally, Sessions became the first member of Congress to endorse Trump.

The endorsement was fitting, because Sessions has been known as one of Congress' biggest bigots. Don Siegelman, the former Democratic Party governor of Alabama, wrote a short letter about how the endorsement is apropos:

Alabama's junior U.S. Senator, Jeffrey Beauregard Sessions III, says "I used to think the Ku Klux Klan was a pretty good group of guys, until I learned they smoked pot." U.S. Senator Ted Kennedy made Sessions confess to having said this during Sessions' would be confirmation hearing for a U.S. District Court judgeship, for which he was nominated by President Reagan.

As the U .S. Attorney, Sessions, in order to suppress the black vote, sent the FBI out in Alabama's "Black Belt" to round up black political activists, have them photographed and finger printed, and told that the FBI would be watching what they did in the upcoming general election. Sessions was challenging a Democratic incumbent for state attorney general, and the Democrat was expected to get a landslide of black votes.

To show he meant business, Sessions had two black activists charged and convicted, both friends of mine. One a sweet 72-year-old woman, Miss Julia Wilder, a retired school teacher, who was sentenced to two years, and Ms. Maggie Bozeman, a noted activist in black politics. I studied the case and the testimony. First, I do not believe they broke the law and secondly, they did not get fair treatment at the trial. Sessions was determined to scare the hell out of the black activists so they would not get out the vote for his Democratic opponent.

Before that 1994 election in which I was running for Lt. Governor, I spoke to a noted black leader, Senator Hank Sanders, who told me most were simply afraid and would not be working as they had in the past to turn out black votes.

Sessions won in an upset victory and two years later won his seat in the U.S. Senate by alleging his Democratic opponent, a state senator, had broken the law in getting a grant to provide water services from which the senator would allegedly benefit. The charges were dropped after the election.

Sessions is as far to the right as you can get. He likes the KKK, doesn't like blacks, and wants every immigrant sent back to wherever they came from. A perfect match for Trump at least on immigration.

Sessions goes way beyond your typical Republican opponent of immigration reform. He has complained that immigrants create “cultural problems,” and has gone on a witch hunt to ensure that undocumented immigrants aren't granted Social Security numbers. So it's no surprise that earlier this month, it was reported that Trump was consulting with Sessions on his immigration plan, which represents perhaps the most extreme anti-migration policy the United States could pursue, including mass deportations and a total militarization of the border.

If Trump's policy is to strategically weaponize bigotry to his own advantage, the Sessions endorsement is a sign it's working.