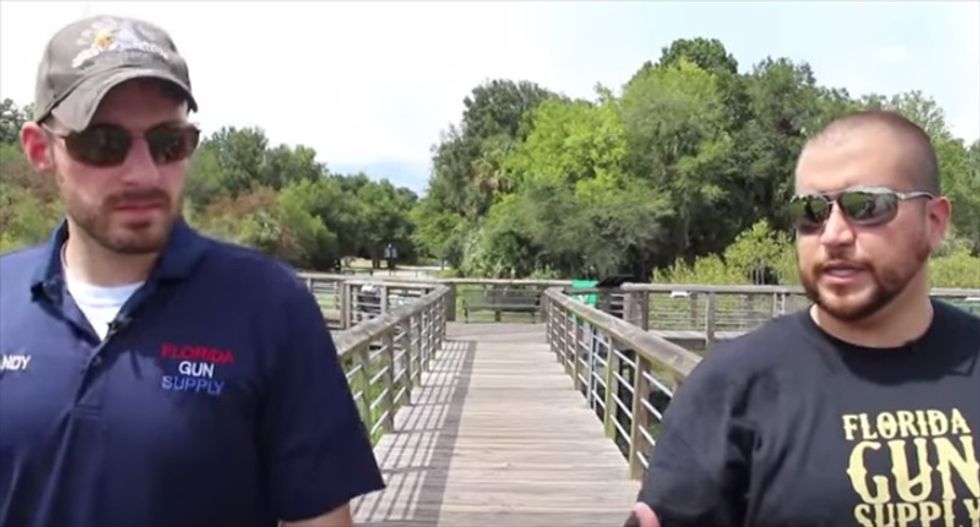 George Zimmerman is partnering with the owner of a "Muslim-free" gun store in Florida by selling Confederate flag prints online, WKMG-TV reported.

An announcement on the Florida Gun Supply website stated that Zimmerman and owner Andy Hallinan would be splitting the proceeds from selling the $50 prints for "legal funds, living expenses, and advancing their mission to change the country."

According to the site, Zimmerman, who was found not guilty in 2013 in the shooting death of 17-year-old Trayvon Martin, offered to donate the prints after hearing about the Council of American Islamic Relations' lawsuit against Halling for banning Muslims from entering the establishment.

"I didn't want to see you give up the fight simply for financial reasons," Zimmerman tells Hallinan in a "mini-documentary" posted by the store on Monday. "[CAIR has] endless resources, they have tons of money. I just wanted to do my part."

Hallinan originally attracted criticism after announcing his anti-Muslim stance in another video, saying he wanted to ensure the safety "all patriots in my community" following the mass shooting attack against a church in Charleston, South Carolina.

However, he did not mention at the time that the shooting was committed by a white person, Dylann Roof, who wore the flag on a jacket. The store's website alluded to this in its announcement, denying that the Confederate battle flag itself is racist, while stating that it "HAS been used by a small amount of people to incite racism, however, it has not become a symbol of racism. You cannot assume everyone who flies a Confederate Flag is racist in the same way that you cannot judge every Muslim to be a terrorist, or every gun owner to be a serial killer."

The site did not mention that the Confederacy's vice-president Alexander Stephens, defended fighting the Civil War in order to protect the Southern slave industry, arguing it to be a "great truth that the Negro is not equal to the white man."

Watch the "mini-documentary," as posted online on Monday, below.