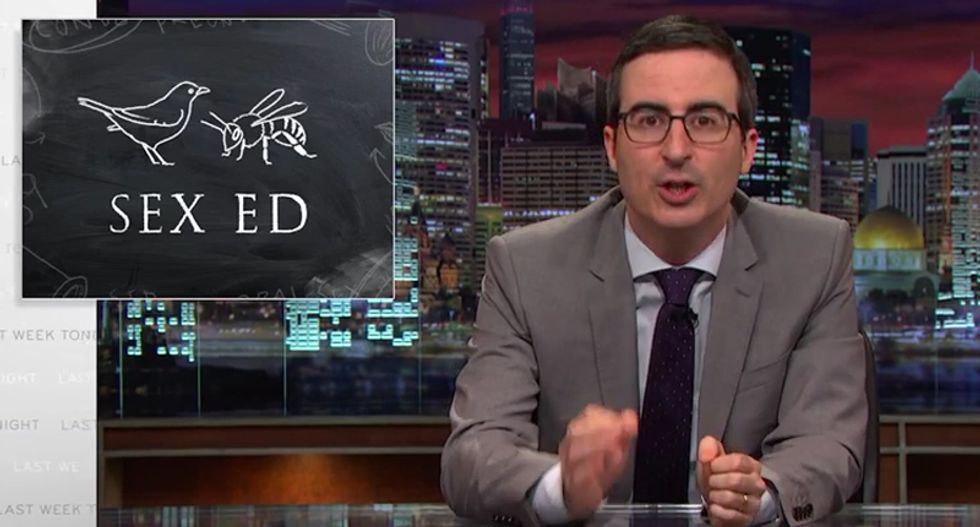 On HBO's Last Week Tonight, host John Oliver hit on sex education in our schools and upon the "weird patchwork system that varies wildly" that leaves kids more confused afterwards than they were before they entered the classroom.

According to Oliver, many states leave it up to individual school districts to come up with their own sex ed programs, with only 13 states mandating that the programs be "medically accurate."

"Which is crazy," he explained. "You wouldn't accept a history class not being historically accurate. 'Prince started the American Revolution in 1984, and his purple reign lasted until the present day. Class dismissed. Class dismissed!'"

Oliver took particular aim at abstinence only programs designed to make students feel that sex is dirty and dangerous, and fearing that "The adult world is just an endless barrage of unwanted dicks."

"Which, incidentally, was the original slogan for Tinder," he added, referencing the popular hook-up app.

Oliver also took exception to the fact that sex ed classes don't take time to discuss the topic of consent, before sharing his own simple rule: “Sex is like boxing -- if one of the parties didn’t agree to participate, the other one is committing a crime."

He concluded by sharing his own video for kids with a hilarious, but honest, talk about sex featuring Nick Offerman, Laverne Cox, Megan Mullaly, Jack McBrayer and Aisha Taylor.