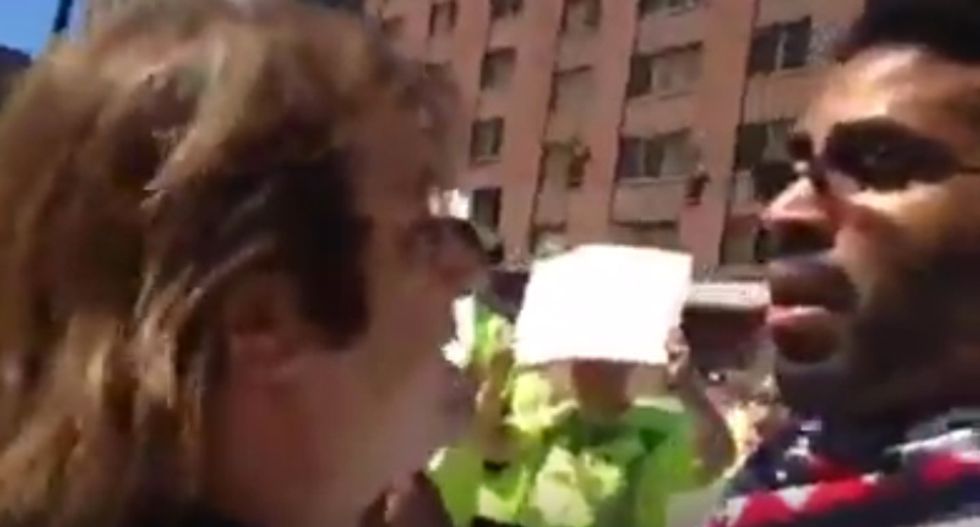 The owner of a Tacoma video arcade is under attack after he was filmed disrupting a protest on the anniversary of Michael Brown's death, going face to face with a protestor and calling him a "n****r."

According to the News Tribune, Les Voros-Bond,  co-owner of Dorky’s Arcade, is feeling the wrath of social media after a video of him -- which can be seen below -- using a bullhorn and racist language went viral.

In the video, Voros-Bond can be seen using an assortment of sirens on his bullhorn, smirking and dancing in front of protesters  trying to disrupt them

At one point he gets in the face of one man, asking him: "What are you protesting?"

As the man chants "Black lives matter,"  Voros-Bond can be clearly seen and heard saying "n****r" over and over again while smiling.

According to Voros-Bond, he didn’t plan on interacting with the marchers but became aggravated saying they were blocking the street in what he called an aggressive manner.

“At first I was just goofing around,” he said. “Then I was helping direct traffic. I wasn’t really informed of their cause. Then it escalated to where they were pushing me around.”

The video, shot by Georgia Greco-Georgantis and posted to Facebook shows otherwise.  Marchers can be seen standing and chanting as Voros-Bond weaves in and out of them.  According to him, he was called the N-word first but admitted that he also used the word while also insisting that he is not a racist.

He claims he later told his business partner that he had done something stupid, and says he went out to apologize to the leader of the protest, saying he didn't know what Black Lives Matter meant.

Members of the group are skeptical, saying he is trying to save his business after a Facebook commenter called for a boycott of his business and protest leaders took up the cause, issuing a statement reading, “We call on your solidarity to reject supporting a business which is owned by an individual who engages in such anti-black, sexist, and violent practices against community members and prospective patrons."

Voros-Bond's business partner and girlfriend, Caroline Dennewith also apologized saying she supported the BLM cause and hopes they can save the arcade they bought five years ago which employs ten people.

The couple are offering Dorky’s as a venue to host events for Black Lives Matter, with Voros-Bond stating, “I am apologizing for the way I acted out there. I messed up. I made a mistake. I’m not racist.”

>Watch the video below, uploaded to YouTube by Grit City: