‘Speak English! We don’t want the Nazis back!': Woman goes nuts after hearing Spanish at IHOP 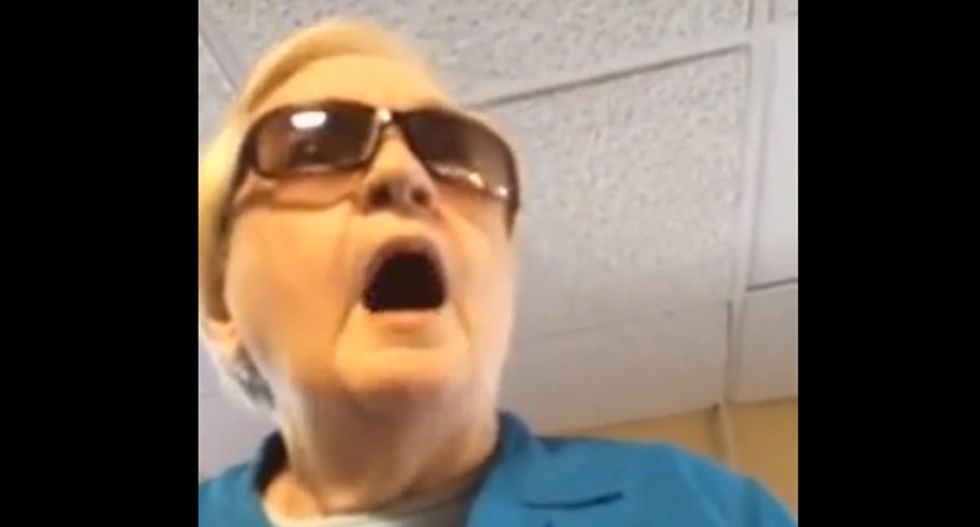 Unidentified woman yelling about speaking Spanish at an IHOP - screenshot/Facebook

In a video posted to Facebook, an elderly white woman went on a racist and oddly ahistorical tirade about the Nazis and the Russians after hearing another woman speaking in Spanish at an IHOP.

In the video, posted by Carlos Steven Baez, the woman can be seen criticizing Baez's mother for speaking Spanish, saying "We speak English here," before telling her "Go back to Spain."

After Baez's mother passionately explains that she speaks English too, saying "I speak English, maybe not good," Baez jumps in telling the woman "You can't be doing that, that's racist."

The woman then launches into a tirade, linking bilingualism to the Nazis and the Russians.

"We want English in the United States," the woman replies. "We have freedom of speech, you're the proof of it. We want that freedom."

After telling her he has been to Spain, Baez then baits the woman saying, "No for Donald Trump."

While most commenters on Baez's Facebook page were supportive of him and his mother, Glenn Price wrote (verbatim), "This is America. I have to go attempt to find translators for many differnent language speakers. I your going to live here, you should either have an interpretor know English. This customer was not treated wrong."

So today at IHOP a white lady stepped in and insulted my mother for speaking Spanish. She told my mom to learn English Or get out of America.my mom does speak English with an accent though! I stepped in an didn't let her do that. Please share!! This will not stop unless we step in. Latinos tenemos que hablar contra el RACISMO!Here's the video of proof!Share!!!