Tea Partier who invented gay scandal about himself also smeared self as a child molester in flyer: blogger 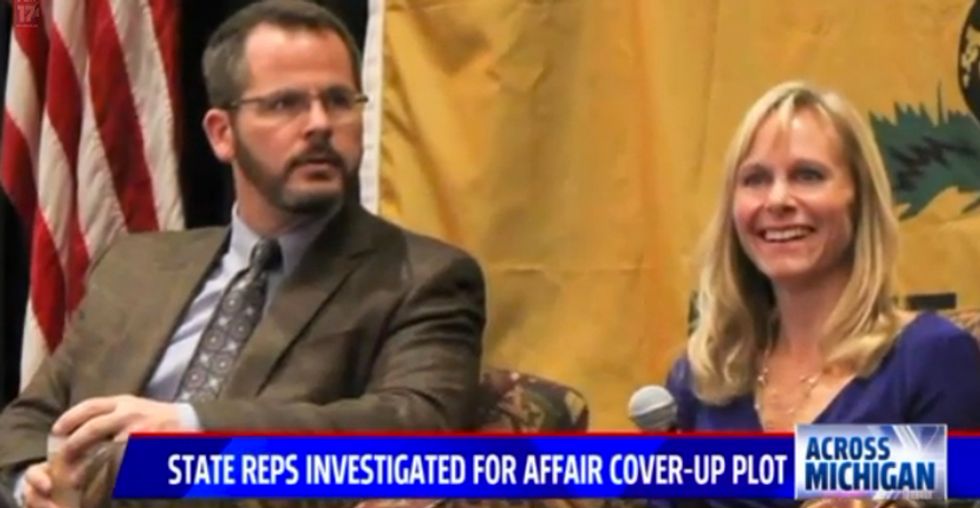 A Michigan blogger -- who first blew the whistle on a Republican state representative who planned to smear himself with a gay hook-up rumor to hide an extramarital affair -- claims this is not the first fraud the Tea Partier has pulled on the public.

Brandon Hall -- who blogs at West Michigan Politics -- claims that state Rep. Todd Courser (R) created a flyer during a tight primary race last year anonymously accusing himself of being a child molester in order to gain sympathy by inferring his opponent's supporters were playing dirty tricks on him.

Courser has been asked by state lawmakers to step down and faces an investigation after a former aide turned over audiotapes of the lawmaker plotting to smear himself with an email saying he had a gay hook-up behind a bar. The Tea Party Republican hoped to soften the blow with a "controlled burn" before word got out that he was having an affair with fellow social conservative state Representative Cindy Gamra (R).

According to Hall who broke the story on the cheating lawmakers in July after receiving forwarded emails from two inside sources -- only to be accused of making it up -- one of the same tipsters says that Courser was behind the anonymous flyer.

According to Hall, Courser created the flyer and then turned to his Facebook page and posted a picture of it that read:  "Do you think Todd Courser is a child molester?"

On the Facebook post Courser wrote, "The pictured flyer (which implies that I am some sort of sexual offender) was found behind the Lapeer County GOP headquarters, Rogers Pharmacy, and a few streets throughout downtown Lapeer. I was made aware of this and the person that notified my[sic] filed a police report on the matter. This is really regretful that this campaign has descended into clear character assassination. I, sincerely would hope and pray that none of my opponents or any of their supporters where behind this despicable activity. It just does not fit into civil society."

According to Hall, Lapeer law enforcement authorities say they have no record of any police report being filed over the flyers.  A commenter on Courser's Facebook page also noted that the font used was identical to one used in "warnings" Courser gave to his opponent, Jan Peabody, about the legality of their own campaign yard signs.

In the recorded conversation Courser had with his aide, the disgraced lawmaker referenced the flyers, saying the gay hook-up email  should read that he is a “gun-toting, bible-thumping, c*ck-sucking freak. …. [who] was accused of child molestation.”

Courser added that, when challenged on the ludicrous story, "I need it to be over-the-top.”

Interview with Brandon Hall below: