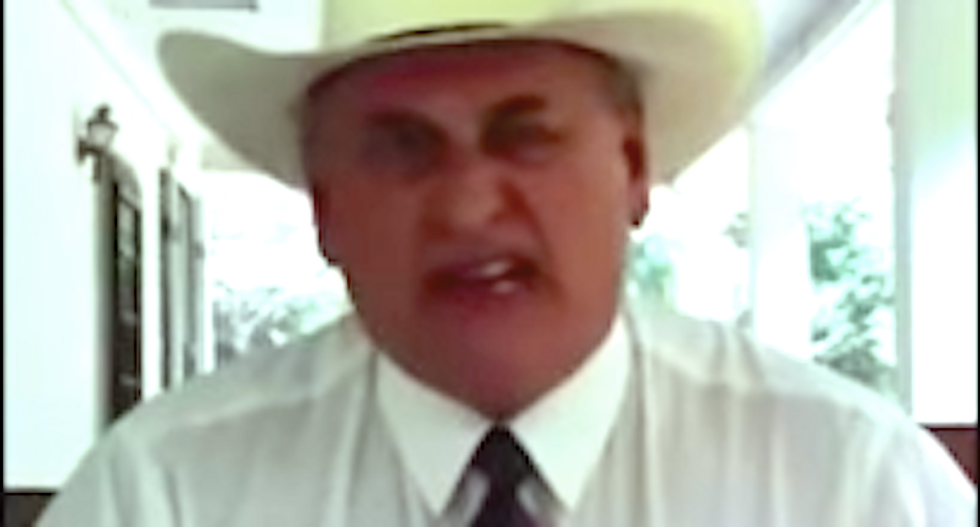 A white Texas man has apparently internalized the conservative media message blaming civil rights activists for the fatal shooting of a sheriff's deputy.

Now the former prison guard in Hemphill is threatening to track down and kill Black Lives Matter activists to avenge the death of Deputy Darren Goforth.

"It's going to end, and it's going to end with that," said Nathan Ener in a Facebook video. "That's not going to happen anymore. That's the end of it. Y'all have pushed us to the limit, and we ain't going to take it anymore. There's stuff that us citizens can do, and we're fixing to do them -- starting now."

He said alleged gunman Shannon Miles, who was found incompetent to stand trial in an unrelated 2012 assault case, was not to blame for the deputy's slaying.

"The one that killed him was these Black Panthers and all these black thugs that comes to your town and marches and hollers 'oink-oink, bang-bang,' and all that retarded sh*t, you know, they're the ones that's responsible for it," Ener said.

Fox News dubbed Black Lives Matter a "murder movement" in an on-screen graphic Monday during a segment with Milwaukee Sheriff David Clarke, who accused President Barack Obama of launching a "war on police," and other conservative media outlets have accused black activists of promoting violence against enforcement.

"Starting now we holding these people responsible," Ener warned. "Like I said, it stops now. Don't ever let a Black Panther or any black group come to your town and march in that town and get done and be able to get in their vehicle and leave. That's over with."

Ener has previously been involved in confrontations with civil rights activist Quanell X over the mysterious death of Alfred Wright, and the Hemphill man has also promoted events by the Ku Klux Klan and the Redneck Mafia.

"Law enforcement, I'm talking to you now," said Ener, a retired corrections officer. "When we get there -- and we're going to be there -- step aside. Our fight is not with you -- it's for you."

Ener urged older people and children to buy slingshots at Walmart to "pepper their ass with rocks" to disable black activists' vehicles and force them to flee on foot -- where they can be more easily targeted with violence.

"You light them up like they got mumps and measles when they go home with all the bumps and knots all over their asses," Ener added. "They won't come back, and what's left of them -- myself and some other people -- we'll take care of that."

Ener held the slingshot draped over his hands like a noose and issued threats against "thugs" like the New Black Panthers and the Black Lives Matter "bullshit," saying they "better run" because he and his associates were watching videos to identify, locate and target activists for violence.

"There won't be another killing in Texas," he warned. "There might be a killing, but it won't be what you think."

He picked up a shotgun and cocked it.

Ener, who insisted he was not racist after sharing KKK materials on his Facebook page, said he was furious that the street where Sandra Bland had been arrested was renamed in her honor.

"That ain't happening," he said. "You people in Hempstead, don't let them name your street after a fricking thug. We're not going to stoop that low. Sandra Bland had a rap sheet a mile long, she was full of dope, disrespectful, embarrassment to Hempstead, Texas, and hung her damn self."

"Well, let me tell you something -- a thug's life don't matter," Ener said. "We don't give a sh*t about you damn thugs. A black life, a white life, police life, a rebel life, a redneck life -- all our lives matter. Every life except for a fricking thug. Your life don't matter, and you sons of b*tches -- you fixing to find out how it don't matter, because you done pissed us off, you bunch of bastards."

He then pauses and looks around somewhat confused, as if he's awoken from a trance.