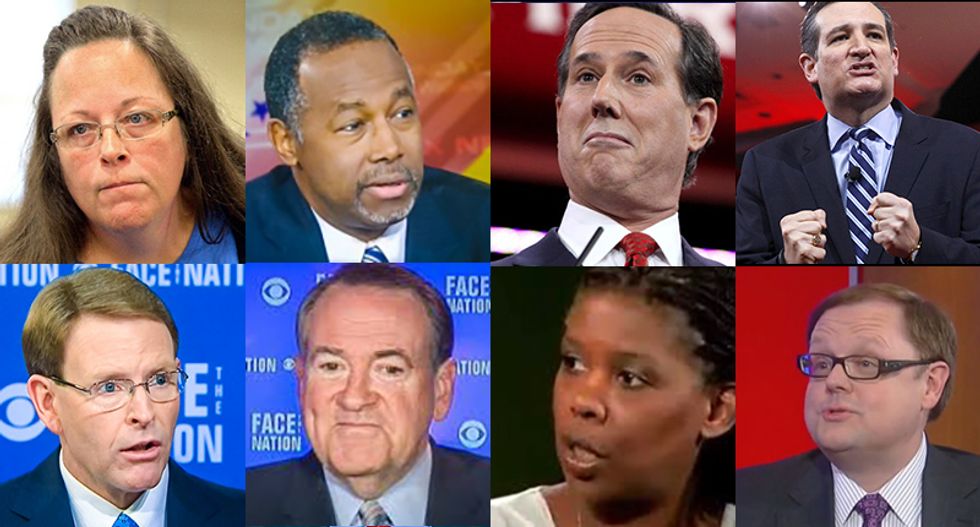 Next weekend, GOP presidential contenders and top lawmakers will mingle with some of the most extreme Religious Right activists in the country at the Values Voter Summit, an annual event in Washington, D.C., sponsored by the Family Research Council, the American Family Association, American Values, and others.

Scott Walker, Ted Cruz, Rick Santorum, Bobby Jindal, Mike Huckabee, Lindsey Graham and Ben Carson have all confirmed that they will be speaking at the event. Carly Fiorina, Marco Rubio, Rand Paul, Chris Christie and John Kasich have been invited but have not yet confirmed their attendance, according to the event’s website. Jeb Bush, who was snubbed by FRC at last year’s event, declined to attend but will send a video address. Donald Trump is the only presidential candidate to have publicly turned down the invitation, provoking the ire of FRC’s president, Tony Perkins.

Candidates who attend the Values Voter Summit choose to align themselves with some of the most radical activists and organizations working to dehumanize LGBT people, erode reproductive rights, demolish the separation between church and state, and eliminate First Amendment rights for religious minorities.

The Family Research Council routinely smears LGBT people with false and degrading pronouncements and campaigns for a United States ruled by the dicta of a small faction of fundamentalists Christians. Another principal sponsor of the summit, the American Family Association, has an equally extreme record.

In addition to the abhorrent record of the sponsors of this event, the presidential candidates will also be joined by a host of radical Religious Right speakers.

Below is an introduction to some of the people who will be sharing the stage with the Republican presidential hopefuls.

As the president of the Family Research Council, the summit’s main sponsor, Tony Perkins heads the organization’s efforts to erode gay rights, reproductive rights, and the separation of church and state.

FRC continually expresses hostility to the rights of Americans who don’t share his conservative brand of Christianity. Last year, Perkins suggested that the First Amendment’s religious liberty protections do not apply to Muslims, not surprising for the leader of an organization that once issued a statement that read, “[W]hile it is true that the United States of America was founded on the sacred principle of religious freedom for all, that liberty was never intended to exalt other religions to the level that Christianity holds in our country's heritage…. Our Founders … would have found utterly incredible the idea that all religions, including paganism, be treated with equal deference." He similarly suggested that Christians who support LGBT rights should not have the same religious freedoms as anti-gay conservatives because “true religious freedom” only applies to those whom he believes hold “orthodox religious viewpoints.”

Perkins has also overseen one of the most anti-gay platforms of any major political organization. FRC officials have expressed support for the criminalization of homosexuality not only in the United States, but also in Malawi and Uganda. Senior fellow Peter Sprigg once said he would “much prefer to export homosexuals from the United States than to import them into the United States because we believe homosexuality is destructive to society.”

Perkins himself frequently reflects the extreme views of his organization. He has:

Family Research Council vice president and retired Army Lt. Gen. William “Jerry” Boykin sparked a controversy when, as a high-ranking official in the Bush Defense Department, he framed the fight against terrorism as a holy war between Christianity and Islam. He has since built a career as a Religious Right speaker, specializing in anti-Muslim rhetoric and anti-Obama conspiracy theories. He:

Mat Staver is the founder and head of Liberty Counsel, which is the organization currently representing Kentucky clerk Kim Davis in her campaign to deny marriage licenses to gay couples in her county. At a previous Values Voter Summit, Staver claimed that progressives are using LGBT rights and secular government as part of an effort to “ultimately implode America” and that the “agenda of the homosexual movement” is to destroy freedom and western civilization. Staver has:

Messianic rabbi Jonathan Cahn is best known for his novel “The Harbinger,” which asserts that the 9/11 attacks were a result of America losing God’s protection due to its sins.  Cahn also:

Fox News commentator Todd Starnes has become notorious for filing false reports based on right-wing conspiracy theories, especially about the supposed persecution of Christians in America, which of course makes him a favorite “journalist” among conservative activists. Starnes has also:

Star Parker is a longtime Religious Right activist who is particularly active in anti-gay and anti-choice advocacy. She has called legal abortion a “genocide” on par with slavery and the Holocaust and blamed “sexual promiscuity” for nearly all financial and societal problems. At the 2011 Values Voter Summit, she claimed that God was getting ready to punish America for marriage equality and legal abortion. Parker has also:

Twin brothers Jason and David Benham were catapulted to national attention when an HGTV show that they were set to star in was cancelled following revelations about their anti-gay, anti-choice, anti-Muslim activism. Since the show’s cancellation, the brothers have become martyrs in the eyes of the Religious Right, which has lifted them up as an example of the supposed persecution of conservative Christians in America. One or both of the brothers have:

Kim Davis, the clerk of Rowan County, Kentucky, became a Religious-Right folk hero this summer when she refused to allow her office to issue marriage licenses after the Supreme Court decision on marriage equality. Davis, saying that she was acting under “God’s authority” and wanted to use her county office to spread “God’s word,” spent five nights in jail after a federal judge found her in contempt of court for violating multiple court orders to begin issuing licenses. The viciously anti-gay group Liberty Counsel and its founder Mat Staver has been active supporters of Davis and have been representing her in court.

At the summit, Davis will receive FRC’s “Cost of Discipleship” award, which previously went to Meriam Ibrahim, a Sudanese woman who was actually persecuted for her Christian faith. Tony Perkins, the president of FRC, has previously compared Davis’ experience to that of Ibrahim, who was imprisoned for converting to Christianity and was later granted asylum in the U.S.

Casey Davis (no relation to Kim Davis) is another Kentucky clerk who has refused to grant marriage licenses to gay couples. Davis called the Supreme Court ruling on marriage equality a “war on Christianity,” and vowed to go to jail — and even die — in order to protect his “freedom” to deny gay couples marriage licenses.

Brigitte Gabriel is the founder and president of ACT! for America, where she works with local activists throughout the country to promote fears that Sharia law is taking hold in the U.S. and must be banned and to challenge textbooks that she believes are insufficiently critical of Islam. She makes frequent media appearances to warn of what she calls the “secret Islamification” of the West. Among other attacks on Mulsim-Americans, Gabriel has:

Pat Fagan is the director of summit sponsor the Family Research Council’s Marriage and Religious Research Institute. He has compared a UN report criticizing the Vatican over its handling of sexual abuse cases to Kristallnacht, the spate of violence in which Nazis attacked Jews and destroyed their property while German police turned a blind eye, and  has advocated for coming up with new names for gay marriage, such as “garriage,” “larriage” or “harriage,” so that when he says “marriage” it will be clear he means heterosexual marriage. He has said that Eisenstadt v. Baird, the Supreme Court ruling that allowed the distribution of contraception to unmarried people, may be “the single most destructive decision in the history of the Court,” explaining that “functioning” societies “punish” and “shame” people who have sex outside of marriage.

Erick Erickson is a Fox contributor and the editor of conservative blog RedState. Constantly pushing for the conservative movement to move further to the right, Erickson has:

Former sportscaster Craig James joined the Family Research Council in 2014. In addition to claiming that Obama may secretly be a Muslim, James has:

Aaron and Melissa Klein are the owners of an Oregon bakery who were sued for violating the state’s nondiscrimination laws when they refused to bake a wedding cake for a lesbian couple. They have since become Religious Right martyrs and were featured by Sen. Ted Cruz in a campaign video. Aaron Klein has said that denying a cake to a gay couple was part of his fight against “Satan.”

As research director of the American Family Association, Ed Vitagliano is a vocal anti-gay activist. Not only does he believe “pray away the gay” works, but he also claims that gay rights will lead to the destruction of America.

Bozell is the Founder and President of the Media Research Center, which works to expose what it claims is rampant “liberal media bias.”