Christian parents fight for the right to adopt some foster kids to spank: 'Whoever spares the rod hates his son' 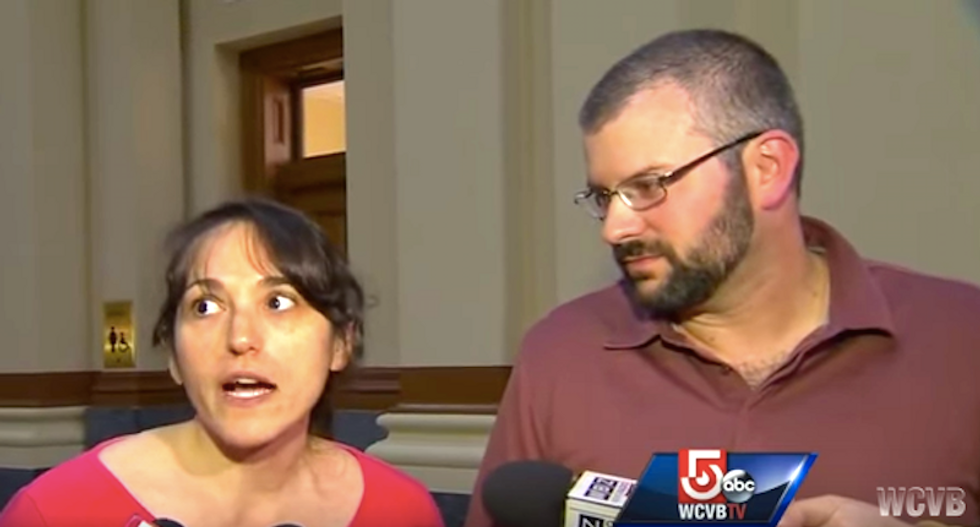 A Massachusetts couple claim they're victims of religious discrimination because the state won't allow them to adopt foster children because they spank their own kids.

Gregory and Melanie Magazu sued the Department of Children and Families after their application was rejected because they admitted to using corporal punishment.

"It's been hard because (being a foster parent) is something that's been in my heart, that I've wanted to do for a long time," said Melanie Magazu -- who grew up in the foster care system herself.

She and her husband, who are members of Grace Reformation Bible Church, were turned down in 2013 because the state does not allow foster parents to use corporal punishment, as the Magazus do with their own three children.

"Because of the significant trauma children in DCF care may have experienced, Department policy requires that foster parents agree not to use physical punishment as discipline," said department spokeswoman Andrea Grossman. "This couple was denied as foster parents based on their use of corporal punishment on their biological children and the negative effect that could have on foster children."

The state argues that many foster children come from abusive homes, so exposure to spanking and other corporal punishment could be traumatizing -- but Gregory Magazu said that's how he shows his Christian love.

"I could see a child coming in our home, seeing discipline handled in a loving and correct way, could actually be beneficial to a child who's been abused," Gregory Magazu said.

The couple agreed not to spank children in their care as foster parents, but they could not make the same promise if they choose to adopt the children.

“We don’t even spank our kids if we’re angry, so there’s no anger involved,” Melanie Magazu said. “These kids are coming from homes where there’s a lot of anger.”

Their lawsuit claims the state has violated their religious beliefs.

"The Hebrew and Christian scriptures tell us whoever spares the rod hates his son, but whoever loves him is diligent to discipline him," said the couple's attorney, David Bodanza. "DCF is saying that Christians and Jews need not apply."

Their case is under consideration by the Supreme Judicial Court, and a ruling isn't expected for at least three months.

"Our hopes are the justices will see that just because a family believes that spanking is (a) legit form of child discipline doesn't preclude them from fostering and adopting children," Gregory Magazu said.

He said the ban on corporal punishment isn't fair.

"Just deciding, well, because you spank, that's it, you're out, just automatically disqualifies a lot of families that could be fully appropriate to help with this huge burden we have here in Massachusetts," Gregory Magazu said.