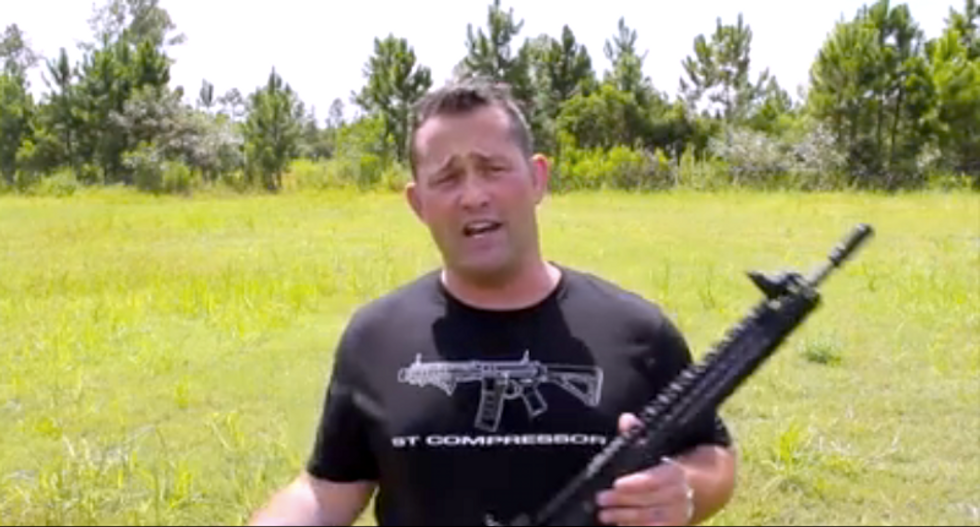 A Florida gun shop is marketing a military-style rifle engraved with a Bible verse and a Knights Templar Long Cross -- the symbol of the Christian crusades.

The "Crusader" AR-15 went on sale last week at Spike's Tactical in Apopka, and a company spokesman said the rifle was intended to be a weapon no devout Muslim would touch, reported the Orlando Sentinel.

"Off the cuff, I said I'd like to have a gun that if a Muslim terrorist picked it up a bolt of lightning would hit and knock him dead," said the spokesman, former Navy SEAL and Blackwater security contractor Ben "Mookie" Thomas.

“Right now and as it has been for quite some time, one of the biggest threats in the world is and remains Islamic terrorism,” Thomas said. “We wanted to make sure we built a weapon that would never be able to be used by Muslim terrorists to kill innocent people or advance their radical agenda.”

The weapon -- which is inscribed with Psalm 144:1: "Blessed be the Lord my Rock, who trains my hands for war, my fingers for battle" -- was immediately condemned by the Council on American-Islamic Relations.

"Is it designed for Christian terrorists?" asked Hasan Shibly, executive director of CAIR-Florida.

The civil rights activist pointed out that only one of the 205 mass killings so far in the U.S. involved a Muslim.

"Sadly, this manufacturer’s fancy new gun won’t do anything to stop the real threat in America: the escalating problem of gun violence," Shibly said. "This is just another shameful marketing ploy intended to profit from the promotion of hatred, division, and violence."

The company's CEO brushed off concerns about the weapon -- which has a safety that operates on three settings: Peace, War and God Wills It.

The gun enters a marketplace where gun shop owners openly discriminate against some customers by declaring their business to be a "Muslim-free zone."

Thomas insisted that Spike Tactical did not intend to insult or antagonize Muslims, although he admits the company would never produce an AR-15 inscribed with verses from the Koran.

"Our goal is not to offend or alienate good people," Thomas said. "The difficult issues people have with each other need to be brought to the table. Often these are hurtful and painful but it's important to be honest."

The CAIR official, however, questioned their interest in honest conversation.

"They don't have to do outlandish things for us to engage them," Shibly said.

Watch Thomas demonstrate the "Crusader" in this Facebook video: