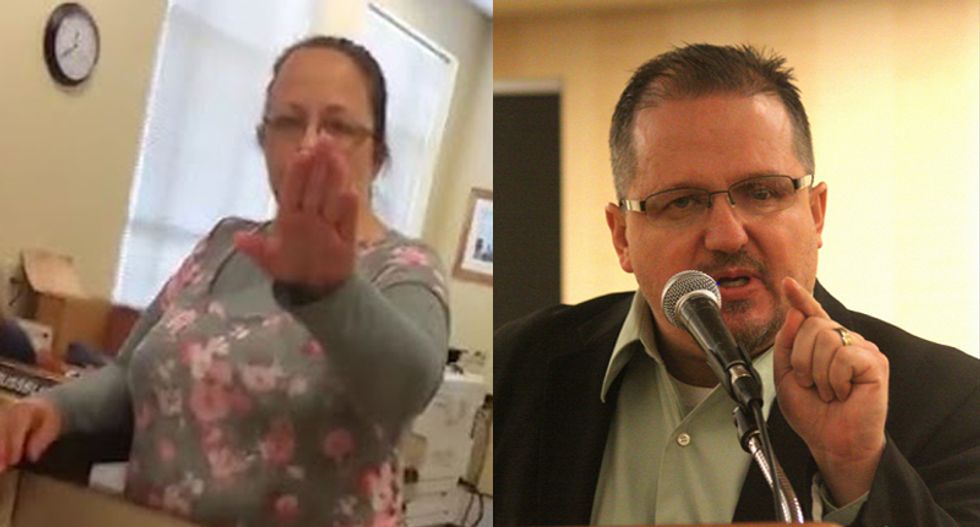 Reacting to a request from the legal team representing embattled Kentucky county clerk Kim Davis, the Oath Keepers militia group will not be making their way to Rowan County to defend Davis against the "imperial judiciary."

In a statement posted on the Oath Keepers website, founder Stewart Rhodes said his group of heavily-armed former military veterans, law enforcement officers, and militia-wannabes were standing down and would not be on hand when Davis returns to work on Monday.

"Upon request by Kim Davis’ legal team, Oath Keepers is canceling the planned security detail for Mrs. Davis in Morehead, Kentucky," Rhodes wrote. "Oath Keepers will NOT be conducting a security detail for Mrs. Davis. We always seek the full consent and cooperation of anyone we protect, and we must respect their wishes if they decline that protection. Anyone who was planning on going to Morehead, KY to serve on the security detail are now asked to not do so. We do thank you most sincerely for your willingness to step up, as unpaid volunteers, in defense of due process. That was a very honorable intent, and we commend you."

Davis is expected back to work on Monday and has stated that she still will not issue marriage licenses to same-sex couples, which may force the hand of U.S. District Judge David Bunning who released her from jail last week on the condition that she not interfere with her staffers following the law.

Previously, Rhodes called upon volunteers to help protect Davis, saying, “People should consider her under our protection. We’ll make sure that our people are keeping a close eye on the situation and we’re going have boots on the ground to keep watch regardless, because this judge needs to understand that he’s not going be able to just go grab this lady whenever he feels like it.”

According to Rhodes, Davis was jailed without a trial, however Davis was slapped with contempt of court which is not a criminal charge or civil complaint that results in a jury trial or hearings and normally results in fines or brief jail time.

It is likely that Davis' legal team, who are suspected of giving her poor legal advice to prolong the case, were wary of the Oath Keepers who almost created a shoot-out with federal officials when they descended upon Cliven Bundy's ranch in Nevada last year, setting up sharpshooters aiming at government agents.

Rhodes advised his followers to save their "gas money and time off work" for an upcoming campaign safeguarding the Texas border from "drug cartel violence and invasion."