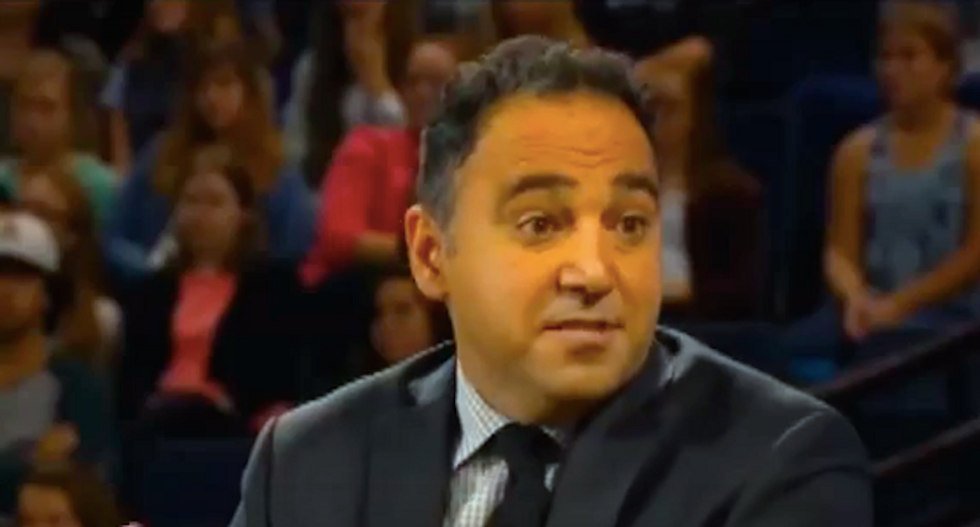 The campus pastor at Liberty University told Sen. Bernie Sanders (I-VT) that police brutality was a spiritual problem, and not the result of racism.

Sanders, a Democratic presidential candidate, spoke Monday at the conservative Christian university founded by the late Rev. Jerry Falwell, where he told a large gathering of students that the U.S. had overcome some of its racist origins -- but more work remained to be done.

"I cannot understand for the life of me how there can be hundreds of groups in this country whose sole reason for existence is to promote hatred, hate groups, and they join us so we can hate African-Americans or gays or Jews or immigrants or anybody that is different from us," Sanders said. "I can't understand that, but let us be clear, that when you have unarmed African-Americans shot by police officers, something which has been going on for years, that is also institutional racism and something that cries out for reform."

The crowd was politely receptive to the Vermont independent's message about racial justice -- but they reacted far more strongly when moderator David Nasser reframed the topic.

"We couldn't agree with you more on (criminal justice reform), though," said Nasser, the university's senior vice president for spiritual development.

"We would say, and I think I speak for many of our students, that it's not so much a skin issue as much as it is a sin issue," Nasser said to thunderous and sustained applause. "That we can change the behavior of police, we could put cameras on them all day long, but behavior modification can only stop so short as identity change. I think we want what you want."

Sanders urged the students to demonstrate their commitment to racial justice by demanding change -- as previous generations of religion-inspired civil rights activists had.

"Let me just say this," the senator said. "The answer is obviously that we have got to change our hearts, but everybody here should know (that) 50, 60, 70 years ago in this country, we had segregated schools and segregated restaurants, and it took a Supreme Court, it took Martin Luther King Jr., it took millions of people to demand public policy which ended segregation."

Nasser, who migrated to the U.S. as a child from Iran and later converted to Christianity, assured Sanders that he and the Christian students shared the same concerns, but he suggested more pro-business solutions.

"I think where you're going to find commonality is at Liberty University," Nasser said. "We're not interested in making sure people are invited to sit in the bus or even sit at a restaurant table -- we want to see them own the bus and own the restaurant."

Sanders said he would attack racism as president by calling for changes to sentencing laws, rolling back the militarization of police and demanding the prosecution of police officers who break the law.

"What we have got to do is, when we see instances of racism, when we hear political leaders appealing to the worst elements of us by making racist attacks against people from another country or people whose color may be different than most of us, we have got to stand up and say, in America, you're not going to do that -- racism is unacceptable," Sanders said.

US oil and gas firms took advantage of energy worries over the Ukraine war to push their fossil fuel products and resist climate change regulatory measures, an analysis showed on Wednesday.

The London-based think tank InfluenceMap analyzed advertisements and declarations by the companies in the weeks before and after Russia's invasion of Ukraine on February 24.

Last Saturday, Donald Trump endorsed a post on Truth Social — his own social media network — by a user who was either calling for or predicting a "civil war" in response to "enemies within" the United States. Exactly a week earlier, an apparent white supremacist terrorist killed 10 Black people in Buffalo. His "manifesto" channels the same basic values and beliefs as the Trump and the contemporary Republican Party.

Even after that event, America's mainstream news media and other public voices, for the most part, still refuse to tell the unfiltered truth about the dangers to American society and freedom represented by Trump and the Republicans.

Trump has 'resisted' efforts to control his endorsements -- the result is 'losers up and down the ballot': NYT

Former President Donald Trump's crusade against Georgia Gov. Brian Kemp ended in humiliating defeat Tuesday, and the New York Times reports that it's the logical end result of a president who has completely shrugged off any restraints on whom he endorses.

According to the Times, Trump has gotten more erratic in his endorsements "since leaving the White House, and the structure it provided" and has often been "making choices on a whim or with little clear path to execution."