Michele Bachmann: US must send message of 'peace' to Iran by bombing nuclear sites -- maybe with nukes 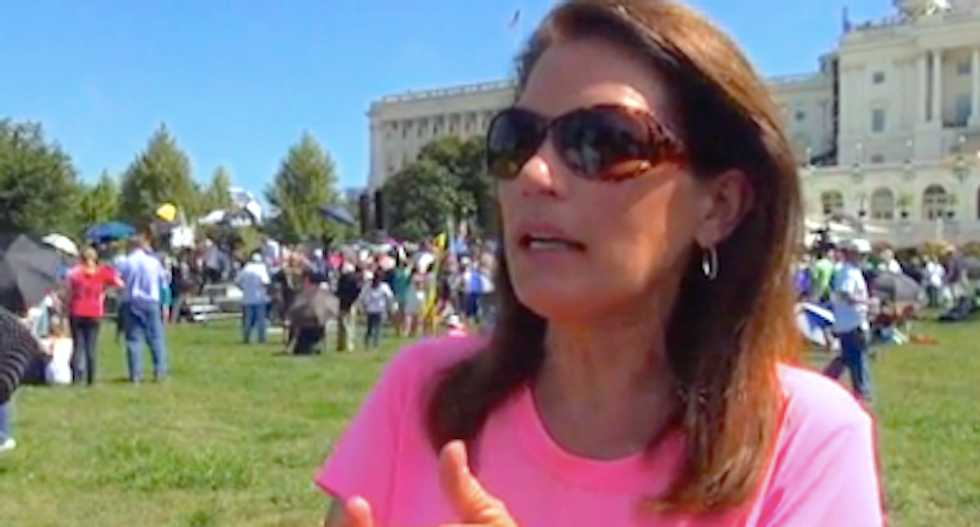 Bachmann, who retired when her term ended last year, argued that a bombing raid against Iran would prevent war -- not cause one.

"There is only one tried and true method that stops a rogue nation from getting a nuclear bomb, and it's this: It is for a country like the United States to take our military superiority and to go into that country and to drop bombs on their nuclear hardware and destroy it," Bachmann said.

The 2012 presidential candidate said the decision to bomb Iran should be an easy one.

"If I was president of the United States, it would take me half a nanosecond," Bachmann told World Net Daily. "We would send out our military equipment and do what has to be done, and in eight weeks, the whole discussion would be over. The Iranian program would be done, and the world would be free from that menace."

Iran's main nuclear site, known as Fordow, is built under a mountain -- which could require nuclear weapons instead of conventional weapons if a strike were ever ordered.

“We know where it is,” Bachmann said. “Go take it out, and it’s end of story, move onto something else. That’ll get the attention of these thugs in the Middle East.”

The former lawmaker -- who earlier this year urged Christians to "rejoice" because President Barack Obama's Iran policies were hastening the Apocalypse and the Second Coming of Christ -- stopped just short of calling for a nuclear attack.

“The United States of America can take out Fordow," Bachmann said. "That’s all the further I’ll go.”

Bachmann, a former member of the House Intelligence committee, called for giving Israel more weaponry, such as bunker-busting bombs, and more access to U.S. aircraft carriers to launch a possible attack on Iran -- but she said American assistance would likely be needed.

“It’s extremely difficult if not impossible for (Israel) to mount this kinetic effort against Iran," she said.

However, she lamented that President Barack Obama would not likely take part in an attack on Iran or would pressure Israel against launching its own military strike.

"I am very concerned he (Obama) would try to stop Israel," Bachmann said. "I think the president has already sent that signal to Israeli Prime Minister Netanyahu that he better not try anything. Because President Obama might take (Israeli jets) out of the sky. He's already made that saber-rattling sound."