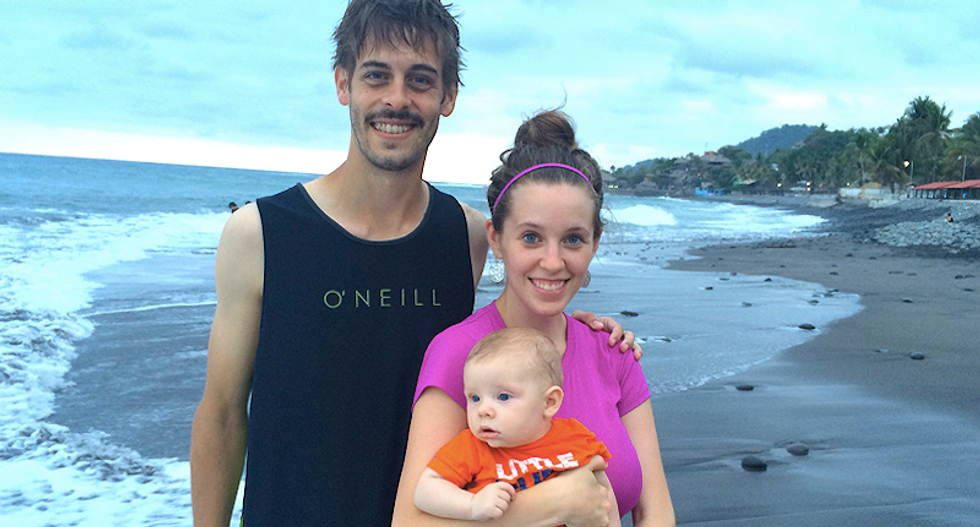 Fans are beginning to question whether Jill Duggar and her husband are spending donated money on mission work or for personal expenses.

The 24-year-old former reality TV star and her husband, Derick Dillard, left with their infant son in late June -- just weeks after she admitted that eldest brother Josh Duggar had molested her and three other sisters -- for a lengthy mission trip to El Salvador.

The couple solicits donations through their Dillard Family Ministries, which an IRS representative confirmed was listed as a 501(c)(3) tax-exempt organization.

But fans have questioned the couple's travel after Derick and Jill Dillard have apparently flown back to the U.S. at least three times -- including this weekend, when they attended cousin Amy Duggar's wedding in Bentonville, Arkansas -- since leaving about two months ago.

"Jill and Derick are back in the states AGAIN !!!!!!!" complained fan Daisy Shay on the couple's Facebook page. "THEY TRAVEL BACK AND FORTH BUT WANT US TO DONATE AND GIVE THEM MONEY...they entire Duggar cult lives and breathes for media attention now that the gravy train ran dry Jessa jumps n front of every camera in desparation. Narcissist behavior."

Jessa Duggar Seewald also admitted during a Fox News interview that she had been molested by her now-27-year-old brother -- who last month admitted to cheating on his wife after his accounts with the adultery website Ashley Madison were revealed.

"I (love) you all and Jill and Derick but it (concerns) me that I am sending (money) for them to do missions and (they) fly home 2 times for weddings," complained fan Shadman Rolfe. "I want to know if my cash is paying for this or (ministry). I want to serve the Lord and I want to give (but) I need to know my money is being used right."

Another fan cautioned Rolfe not to expect an explanation from the Duggar family about the couple's spending.

"You will never get a straight answer, you are just financing their extended vacation," said Claudia Brown.

The Dillards joined the rest of the 21-member Duggar family -- with the exception of Josh Duggar, whose whereabouts remain unclear after he apparently failed to show up for a lengthy stay of his own at an Illinois rehabilitation center.

However, his wife, Anna Duggar, joined the marriage celebration with her in-laws.

Jill Dillard flew to New York City last month to participate in a TLC program on sex abuse, and some fans have questioned whether the couple even went to El Salvador -- where they claim to be ministering to gang members.

"People wise up," warned fan Nikita Jones. "Can't you tell when you're being scammed? They're taking trips to places that YOU can't afford and they're doing it with YOUR money. They have no credibility, they are NOT transparent with what they're doing with your donations and they could care less about you. If you want to donate to charities, start locally. I'm sure there are people in YOUR community that are more deserving than these scammers."

Watch this video report posted online by the Daily Mail: