Ben Carson: Pledge of Allegiance and other ‘founding documents’ prove America is a Christian nation 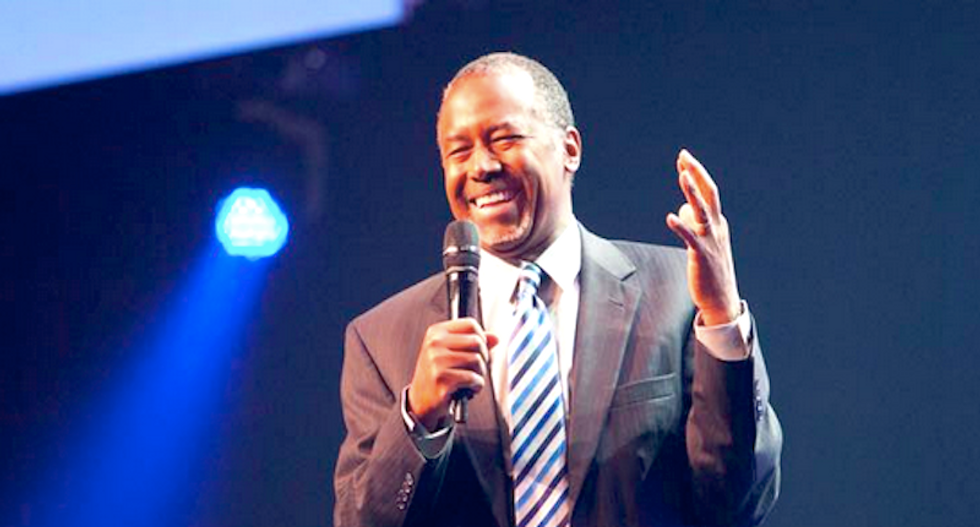 Ben Carson at the Free Chapel in Gainesville, Georgia (Facebook)

Ben Carson said the motto, "In God We Trust" -- which was adopted in 1956 -- proves that the United States was founded as a Christian nation.

The Republican presidential candidate spoke Sunday morning at both the 9 a.m. and 11 a.m. services for a Georgia megachurch, where he vowed to wage war against "the PC police" to save the nation's soul, reported the Atlanta Journal-Constitution.

“A lot of people have said to me: ‘Why are you willing to get into this fray when you had such a wonderful career and reputation and you were blessed financially and you could just sit back and relax?’" Carson, a retired neurosurgeon, said during the 9 a.m. service.

“Well, I’ll tell you why: It’s because America is worth saving," he continued. "If that means getting into a war with the PC police, I’m ready to fight that war -- and I hope you will join me.”

The candidate signed copies of his book, A More Perfect Union, as part of a book tour that was not planned or staged by his campaign, the newspaper reported.

Carson, a Seventh Day Adventist, told the gathering at the Free Chapel in Gainesville that, if elected president, he would place God at the center of American culture and politics.

The U.S. Congress adopted "In God We Trust" as the official motto nearly 60 years ago, during the Cold War, to replace the original motto, "E pluribus unum," which was adopted in 1782.

"In God We Trust" has been used on coins since 1864 and first appeared on paper currency in 1957.

The Pledge of Allegiance was written in 1892 and formally adopted by Congress in 1945, but "under God" was not added to the pledge until 1954.

“So if it’s in our founding documents, it’s in our pledges, in our courts and it’s on our money, but we’re not supposed to talk about it, what in the world is that?" Carson said. "In medicine it’s called schizophrenia -- and I, for one, am simply not willing to kick God to the curb.”

“I believe in live and let live, and that’s what our founders believed in too,” Carson said.

“You can do what you want to do as long as it doesn’t infringe upon somebody else’s rights, but it was never intended that anybody should have extra rights and that they should get to redefine everything for everybody else. That’s a problem for me.”