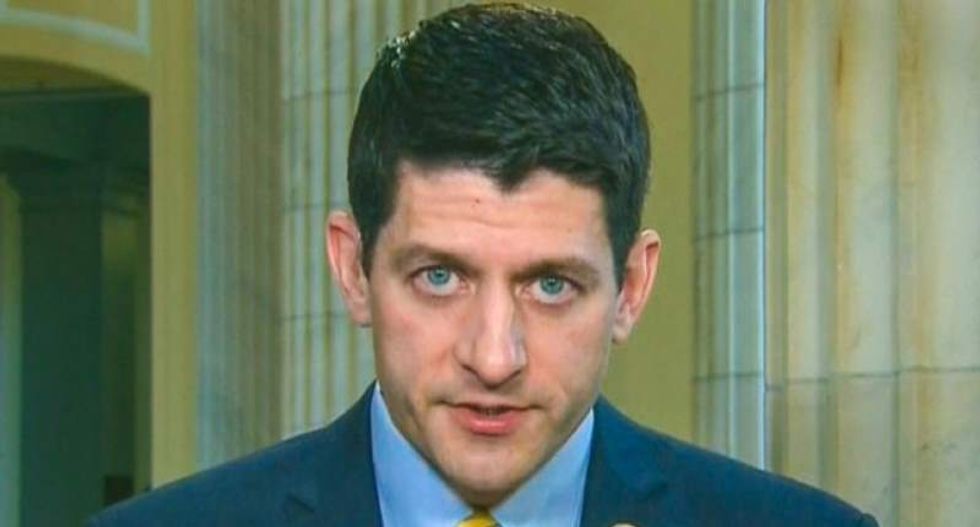 Facebook COO Sheryl Sandberg may want to reconsider her latest "Lean In Award."

As Gawker reported, Sandberg gushed over Rep. Paul Ryan's (R-WI) demand that his family time not be impacted if he accepts his fellow Republicans' calls for him to become House Speaker.

"We need work to work for parents – and having leaders who weigh responsibilities as fathers as much as their responsibilities to their jobs shows all of us what is possible," Sandberg wrote on her Facebook page.

But as many respondents have pointed out, Ryan's policy stances have run counter to Sandberg's support for women and families. Here are six prominent examples:

1. He opposed legislation expanding womens' fight against the wage gap

Ryan made his position clear when he voted against the Lilly Ledbetter Fair Pay Act of 2009, which expanded workers' right to fight wage discrimination. Despite his opposition, the measure passed in Congress and was the first bill signed by President Barack Obama after he took office.

Obama's re-election campaign hammered Ryan on this fact, and Ryan found himself having to explain his apparent difference of opinion with Mitt Romney after being picked as the former Massachusetts governor's running mate.

"Lilly Ledbetter was not an equal pay law. It was about opening up the lawsuits and statute of limitations," the congressman told ABC News during the 2012 campaign. "It wasn't an equal pay law, and of course, we support equal pay."

Ryan's statement supporting equal pay is undermined by the fact that he has opposed the Paycheck Fairness Act, which sought to add provisions to existing labor legislation to counteract the gender pay gap, having voted against it twice.

As the New Republic noted, Ryan named his family earlier this month as one reason why he was reticent to take over for House Speaker John Boehner (R-OH) in such a high-profile position.

However, he also voted against another bill in 2009 offering four weeks of paid parental leave for federal employees.

4. His "war on poverty" is really a war on poor people

One thing the congressman has supported is making cuts to the Supplemental Nutrition Assistance Program (SNAP), more commonly known as "food stamps." But after making his case for doing so last year, he was accused of misrepresenting or misunderstanding data showing that federal food-assistance programs were working properly.

Ryan was challenged more directly last July, when the House Budget Committee heard a first-hand account of how the program can help from one recipient, Tianna Gaines-Turner.

"I am not a number. I am not a statistic," she said. "I am not a food stamp. I am an individual who lives in the inner city who just so happens to be, right now, struggling, just like so many Americans are struggling."

Rep. Barbara Lee (D-CA) reportedly urged Ryan to let Gaines-Turner testify during past meetings, only for him to allegedly be reluctant to do so, citing scheduling issues.

5. He wants time to take care of his kids -- but wants to make it harder for poor people to do the same

The congressman has also called for cuts to child-care subsidy programs that benefit low-income Americans, which prompted this response by Nan Mooney at MomsRising:

I'm a single mother with two kids under 3, a full-time student, and working, so I don't have much time to write.

But I have to tell whoever is willing to listen that the daycare subsidy I receive has saved my life. I'm able to go back to school to get the kind of job that will help me afford to support the three of us on my own and I'm secure in the knowledge that my children are well-cared for and developmentally stimulated while I can't be with them.

They will be ready for school right when I finish and together I see us accomplishing great things. None of this would be possible without that subsidy. It is our lifeline and I thank God for it every day.

6. He called rape a "method of conception"

Ryan is staunchly anti-abortion, to the point where, as he said during an August 2012 interview, "the method of conception doesn’t change the definition of life."

As Jezebel reported, Ryan has co-sponsored legislation on two separate occasions that would eliminate exceptions in abortion bans concerning rape, incest, or the health of the impregnated woman.

The second time, the bill contained a provision allowing for pregnant women from states banning abortion to be sued by the men who raped them if they chose to undergo the procedure in another state.