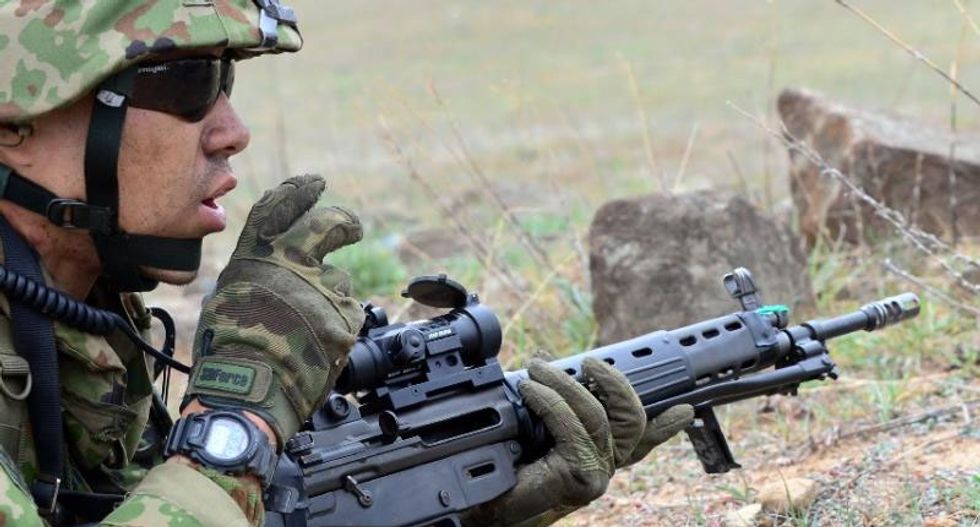 A Japanese soldier takes part in a 2014 joint military exercise with US Marines at Camp Pendleton in southern California (AFP Photo/Frederic J. Brown)

Combat veterans spoke to The Nation's Joshua Holland in hopes of confronting the "lies" peddled by the NRA and their corporate masters.

“I think there’s this fantasy world of gunplay in the movies, but it doesn’t really happen that way,” said retired Army Sgt. Rafael Noboa y Rivera. “When I heard gunfire [in Iraq], I didn’t immediately pick up my rifle and react. I first tried to ascertain where the shooting was coming from, where I was in relation to the gunfire and how far away it was. I think most untrained people are either going to freeze up, or just whip out their gun and start firing in that circumstance."

The NRA's chief spokesman, Wayne LaPierre, infamously claimed following the Sandy Hook child massacre that "the only thing that stops a bad guy with a gun is a good guy with a gun" -- but Rivera and other combat vets say that's ridiculous.

"I think they would absolutely panic," Rivera told The Nation. [Editor's note: Rivera served as Raw Story's associate publisher in 2013.]

[Editor's note: A prior version of this story identified Stephen Benson as a former Navy Seal with opinions about the current state of gun violence in America. We are currently re-researching this aspect of the story and have, for the time being, removed his comments.]

The essential lie embedded in LaPierre's claim -- which many gun owners have swallowed whole -- is that intentions make any difference whatsoever in a gun battle.

Many civilian gun owners understand this, and some are taking increasingly popular weekend-long tactical training courses.

But experts say that's just not enough to teach gun owners when to shoot and when to hold their fire, how to overcome tunnel vision, and how to determine which combatants are "good guys."

“The notion that you have a seal of approval just because you’re not a criminal — that you walk into a gun store and you’re ready for game day — is ridiculous,” said David Chipman, an agent and former SWAT team member with the Bureau of Alcohol, Tobacco, Firearms and Explosives.

Those concerns stopped combat veteran John Parker, who holds a concealed carry permit, from using his weapon to confront a gunman who killed nine people last week at an Oregon community college.

"We could have opened ourselves up to be potential targets ourselves, and not knowing where SWAT was, their response time, they wouldn’t know who we were, and if we had our guns ready to shoot, they could think that we were bad guys," said Parker, who took shelter with other students in a classroom.

He pointed out that highly trained and specially equipped Secret Service agents had never fired their guns to defend a president from assassination, but instead used their bodies to tackle or stop assailants.

That's basically what Republican presidential candidate Ben Carson suggested Tuesday, when he criticized victims and bystanders in the Oregon shooting.

“Not only would I probably not cooperate with [the gunman], I would not just stand there and let him shoot me,” Carson said. “I would say, ‘Hey guys, everybody attack him. He may shoot me, but he can’t get us all.’”

However, the retired brain surgeon's suggestion assumes a roomful of random bystanders would have even one person who was able to overcome their biological instincts to place themselves in harm's way.

Most people, without extensive training intended to override their survival instincts, tend to “freeze up or not know what to do, and to have difficulty performing actions correctly,” said Dr. Pete Blair, director of the Advanced Law Enforcement Rapid Response Training Center.

Those attempts by improperly trained civilians become even more dangerous when guns are introduced -- as recent cases in Michigan, where a woman opened fire on suspected shoplifters, and Texas, where a passerby accidentally shot the carjacking victim he was trying to help.

“Despite what we see on TV, the presence of a firearm is a greater risk, especially in the hands of an untrained person,” Chipman told The Nation. “Someone can always say, ‘If your mother is being raped by 5 people, wouldn’t you want her to have a gun?’ Well, okay, if you put it that way, I’d say yes -- but that’s not a likely scenario."

"The question is: If you see someone running out of a gas station with a gun in their hand, do you want an untrained person jumping out and opening fire?" the former ATF agent said. "For me, the answer is clearly ‘no.’”