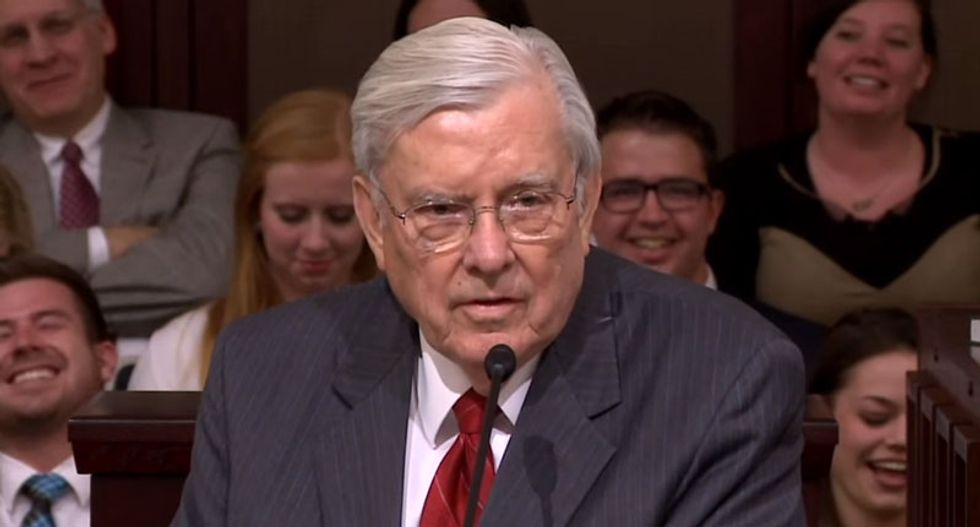 For all the sad and desperate single ladies out there who are pining to “put a ring on it” … LDS Elder M. Russell Ballard has some simple, whimsical advice: You beautiful girls: Don’t wander around looking like men. Put on a little lipstick now and then and look a little charming. It’s that simple. I don’t know why we make this whole process so hard.

The video of Ballard’s condescending remarks is going viral after Zelph on the Shelf’s recent post called attention to the old patriarchal cult leader’s mansplaining: “No, this isn’t a quote from 50 years ago. It’s a quote from an alleged apostle of Jesus Christ in 2015. It’s the kind of thing I’d be fine with my grandfather saying, but not someone who claims to represent God himself to a bunch of people who hang on his every word. In the age of information, where everything a church leader says can be heard globally.”

Ballard’s devotional is all the more disturbing considering all the giggling coming from his audience. In the video, young men and women are cracking up after every single stupid comment the “inspired” elder makes. Why? Why do they not stand up in unison and walk the hell out in protest?!

This is the way of patriarchy and cults and spiritual abuse. That women do not resist is frustrating … that submissive Christian women cooperate in their own oppression is infuriating.

Never mind that we are living in 2015 ... a time in which matrimony, heterosexuality, domesticity, subservience, church, faith, and religious belief are no longer the default life expectations for young women. Just trust this crusty old chauvinist and put on a dab of lipstick, “ladies.”