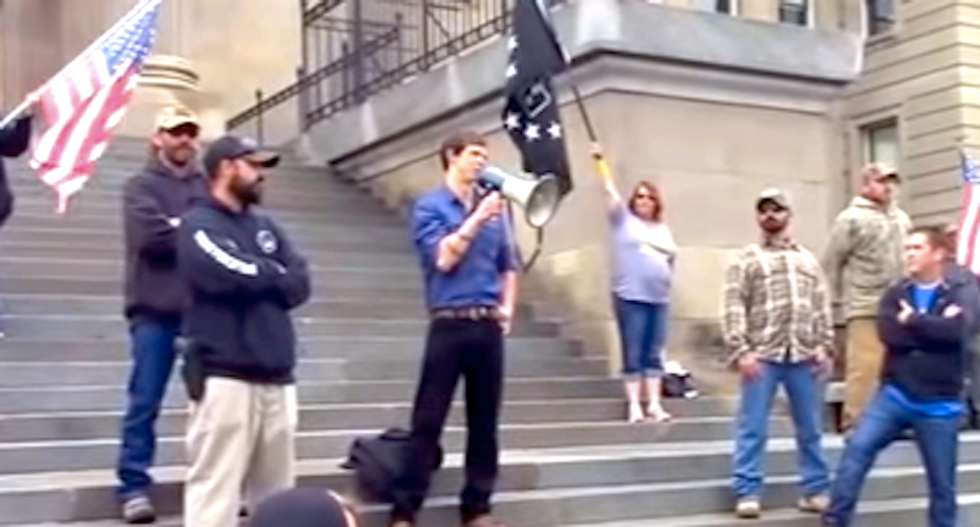 An Idaho militia group protested the arrival of Syrian refugees by issuing dark warnings based on anti-Muslim conspiracy theories.

The III% Idaho group rallied Monday outside the statehouse in Boise, where about 100 anti-government activists, many wearing flak jackets and other armor, waved American flags and banners promoting their pro-gun militia group, reported Hatewatch.

“This isn’t some made-up crap we’re spewing out here, like they’re leading you to believe across the way," shouted Brandon Curtiss, president of the right-wing group.

Actually, "made-up crap" describes a lot of what the III% Idaho group is spewing.

The group has been protesting the College of Southern Idaho’s refugee resettlement program for several weeks, warning that Islamic State radicals were sending "sleeper" terrorists to western nations among refugees from war-torn Syria.

About 300 refugees are expected to be screened and then resettled in communities throughout the state.

Federal authorities admit that gaps do exist in screening Syrian refugees, but they said these migrants will still undergo extensive background checks -- although the results are confidential, which makes it difficult to assure alarmists.

"There are many terrorist organizations out there who have stated numerous times that they will manipulate the refugee crisis to spread radical Islam,” said Chris McIntire, a spokesman for the III% group.

“We are seeing this in Europe," McIntire said. "We have seen it for the past several months, where refugees are rioting in the streets, they are waving Islamic flags, they are praying to Allah, they are demanding Sharia law, which includes the second-class treatment of women.”

Anti-Muslim extremists -- including Brigitte Gabriel of ACT! for America, Pam Geller and Mark Levin -- have been promoting those conspiracy theories in right-wing circles and then out onto social media.

The III% movement was co-founded by pro-gun, anti-government activist Mike Vanderboegh, who promotes the idea that the Second Amendment allows unsatisfactory election results to be overturned by armed revolt.

The group's name refers to the apocryphal belief that only 3 percent of colonists participated in the American Revolution, and group members take pains to describe themselves as a mainstream conservative group -- although their rhetoric frequently overlaps with other far-right "patriot" groups and even white supremacist groups.

The far-right connection is missed by some media outlets, including an Idaho TV station that reported the III% percent movement "stands for conservative protections of the constitution and community safety."

Sounds pretty tame -- but the group's leaders promote a nationalistic agenda that presents Americans as victims of an ethnic minority protected by liberal elites.

“We want to take care of Idahoans first, and we are tired of them taking the dwindling resources we already have for the state of Idaho, and funneling that over to refugee programs to help these guys coming in here, and ignoring our Idaho citizens – our homeless, our veterans, our students that need help here first," Curtiss said. "We’re not against refugees, what we’re saying is, we need a better process."

“They’re draining our dwindling resources that’s already in place and not looking out for Idahoans first, or U.S. citizens for that matter,” he added.

Watch video of the protest posted online by The Voice Of Idaho: