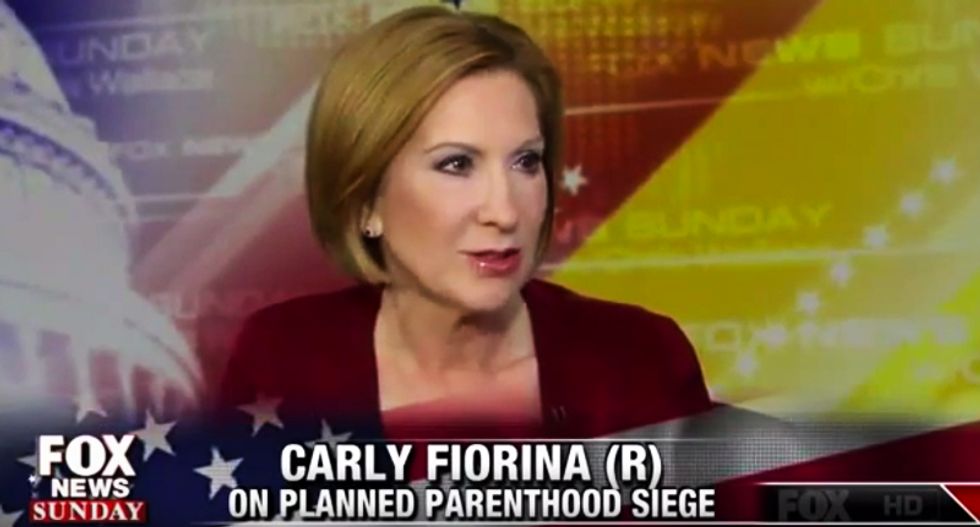 Aspiring GOP presidential candidate Carly Fiorina doubled down on her assertion that Planned Parenthood was harvesting fetal parts for profit, while at the same time stating that linking the shooting at the Colorado Springs Planned Parenthood to anti-choice activists was "typical left-wing tactics."

Appearing on Fox News Sunday with Chris Wallace, the deposed HP CEO stated that, since Planned Parenthood was no longer going to transfer fetal part to medical researchers, it was a tacit admission of guilt.

Fiorina has been under fire for claiming she saw "a fully formed fetus on the table, its heart beating, its legs kicking, while someone says we have to keep it alive to harvest its brain," in the highly edited videos created by anti-abortion group Center for Medical Progress. Fact checkers have repeatedly said no such video exists. This, however, has not deterred Fiorina from repeating it.

Speaking with Wallace, Fiorina blasted critics of her over the top rhetoric when it comes to abortion, saying, "It is so typical of the left to begin demonizing the messenger because they don't agree with your message."

"So, what I would say to anyone who tries to link this terrible tragedy to anyone who opposes abortion, or opposes the sale of body parts, is this is typical left-wing tactics."

Fiorina did not address comments made by  the Colorado Springs Planned Parenthood shooter, Robert Lewis Dear, who reportedly told police investigators "no more baby parts" after he was apprehended for killing three -- including a police officer -- as he shot up the health clinic.