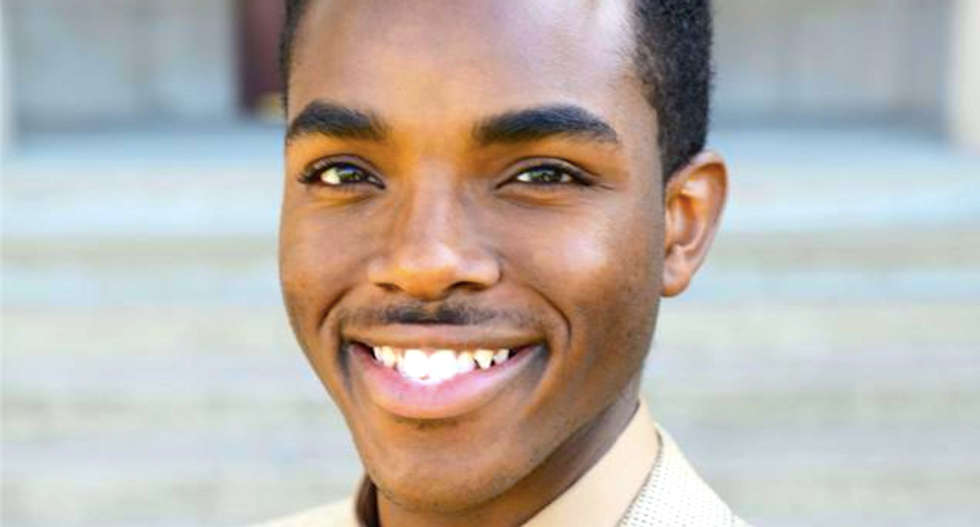 Missouri's student body president could face impeachment after claiming the Ku Klux Klan had been seen on campus.

Payton Head, president of the Missouri Student Association, has apologized for sharing the false information on his Twitter account, and he later invited students who objected to his leadership to initiate impeachment proceedings if they wished.

For students who have issues with my leadership, once again you may find impeachment proceedings at https://t.co/iM2DnCaIer.
— Anthony Tretter (@Anthony Tretter) 1447276377.0

That's apparently not enough for some conservatives -- who want the student expelled or even arrested.

Head tweeted Tuesday night that he was "working with" University of Missouri Police, the Missouri State Highway Patrol and the National Guard after KKK members had been "confirmed to be sighted on campus."

He warned other students to stay away from windows and take other safety precautions, but he later deleted his statements after the MU alert system notified students that no immediate threat existed and asked them not to spread false rumors.

MSA president is apologizing for sharing false information about the KKK on MU. Here's the info he had posted. https://t.co/oNArrqjp63
— Benjamin D. Peters (@Benjamin D. Peters) 1447260999.0

Head later apologized, saying he passed along inaccurate information out of fears for student safety.

"I received and shared information from multiple incorrect sources, which I deeply regret," Head said. "The last thing needed is to incite more fear in the hearts of our community."

Head told students to rely on the MU Alert system and its Twitter account instead of other sources -- including himself.

Conservatives are digging into Head's background, which includes at least one meeting with President Barack Obama during a visit to the White House.

Internet sleuths claim that Head, a Chicago native, served as an intern for the city's mayor, Rahm Emanuel, and the student himself indicated he had done some type of community work with the mayor.

They also attacked his father, a former high school principal, for filing a lawsuit after he was fired.

Head played a leading role in the student protests that forced the resignation of the university's president, Tim Wolfe, over complaints that he had not done enough to address concerns about the safety of black students.

The student president claimed in September that some men in a pickup truck hurled racial slurs at him as he walked on campus, and his emotional Facebook post about the incident was widely shared.

“I really just want to know why my simple existence is such a threat to society," Head wondered in that social media post.

Another student, Jonathan Butler, went on a hunger strike earlier this month to protest Head's treatment and other alleged instances of campus racism -- and his protest was backed by increasing numbers of students, including the Missouri football team.

"Let it be known I have no ill will or thoughts of harm toward Mr. Wolfe," Butler said in announcing his hunger strike. "But I do have an urgency to make the campus I call home a more safe, welcoming and inclusive environment for all identities and backgrounds."

Conservatives are using Head's apology to attack all those students' credibility, and they're also attacking Butler as a hypocrite of sorts because his family is wealthy.

A widely shared viral image shows Butler, wearing a photoshopped "Scumbag Steve" hat, complaining that he was oppressed by privileged white people while coming from a family worth $20 million.

It's true that his family is wealthy, but the graduate student never claimed to be poor -- and conservatives apparently failed to notice that Butler's wealth was unable to protect him from experiencing campus racism.

Two 19-year-old men have been arrested for threatening to kill black people in the wake of Wolfe's resignation, which conservatives have complained was a shameful surrender to political correctness.