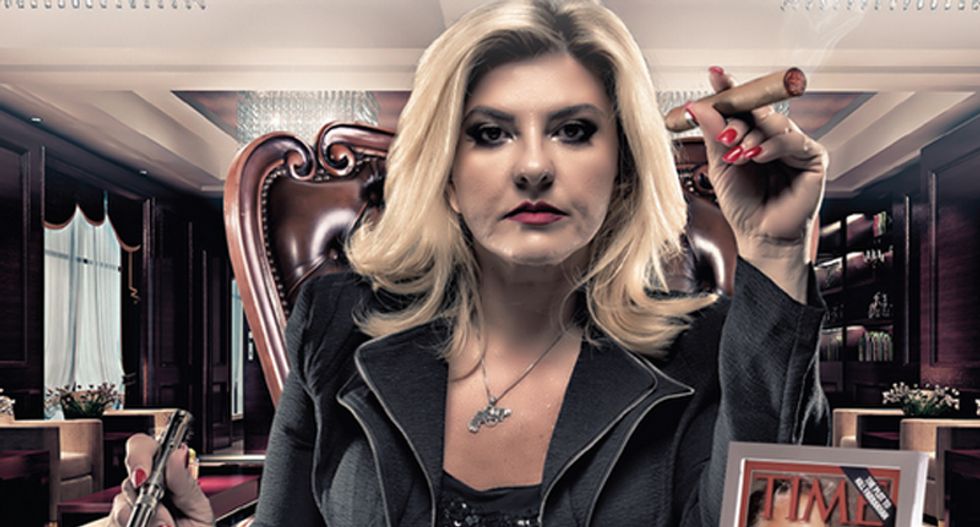 Lawmaker Michelle Fiore from her 2015 "Walk the Talk" calendar

A GOP lawmaker who claimed that cancer is a fungus that can be treated with salt water has had the license for her home healthcare business in Nevada pulled, reports KTNV.

Republican Assemblywoman Michele Fiore's home based "Always There 4 You" health care company has been under investigation by the state after she refused to allow inspectors to look at her books despite receiving $6 million in Medicaid funding over a five year period.

After Fiore refused to meet with auditors and threatened officials with political retaliation, the Nevada Bureau of Health Care Quality and Compliance pulled the flamboyant lawmaker's license on Tuesday after being unable to contact her.

Inspectors who showed up at Fiore's headquarters -- after she failed to respond to a registered letter -- found a new company moving into her former place of business.

According to a statement from Fiore, she claims she decided to close the business due to government red tape.

Unmentioned in Fiore's complaint about government interference were the multiple I.R.S tax liens that have been filed against her and her business.

Fiore came to national attention after claiming on her local radio show, "If you have cancer, which I believe is a fungus, and we can put a pic line into your body and we’re flushing with, say, salt water, sodium cardonate (sic) through that line and flushing out the fungus.”

The lawmaker has also been associated with fee-dodging rancher Cliven Bundy while appearing at his rallies, has filed paperwork to run for U.S. Congress, and recently posed for a gun calendar which she is selling for $25 on her campaign website.