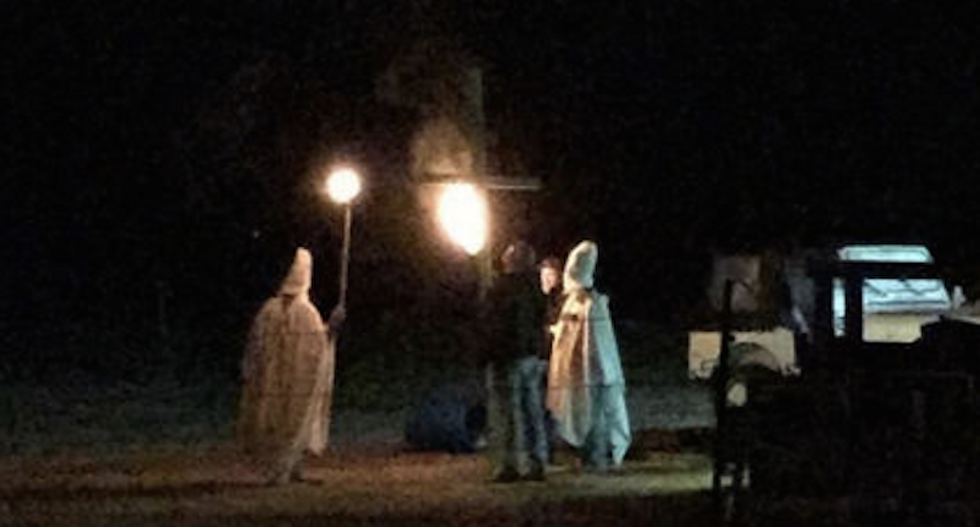 The husband of an Oklahoma mayor won't likely face any charges after dressing up in a Ku Klux Klan uniform and possibly burning a cross in a Halloween "prank gone bad."

Deputies told the woman there wasn't much they could do about the men and their display.

"(We) tried to explain to the woman that although in poor taste, the Constitution protects freedom of speech and that we can't make them stop,” said Deputy Aaron Moore in his incident report. “This further irritated the woman.”

The deputies went to speak with the men and found 47-year-old Cary Sharp, whose wife is the mayor of Lahoma, and two other men wearing white, KKK-style robes and burning a fire near a cross -- although authorities said the cross was never actually burned.

“I advised the group why I was there, and that although I know it was a joke that they save them and myself anymore headaches to not burn anymore crosses,” Moore said in the report.

Sharp said he and some friends were drinking alcohol when they decided it might be funny to cut holes in some sheets and dress up like members of the notorious hate group.

"Sit around the bonfire and drink a couple of beers and thought, well my buddy -- his last name is White -- and the subject got brung (sic) up," Sharp said. "We just thought it'd be something to do, and it's not something to do. I am embarrassed. I've shamed my family and friends, and I apologize for that."

Mayor Theresa Sharp pointed out that she was not present when her husband wore the costume or took part in the bonfire burning -- which she described as a "prank gone bad."

"I was out trick-or-treating with my son, and I in no way support the activities that occurred," she said.

"I just don't condone it regardless of who it is -- whether it's my husband or Joe Smith around the corner," the mayor added. "It's not anything that I think needs to be represented for our community at all."

A photo of the men, showing what appeared to be a burning cross, circulated on social media -- although Cary Sharp claimed the image was misleading.

The woman who reported the incident said that didn't matter because children and others out enjoying Halloween likely saw the robed men burning what appeared to be a cross.

"We are a small community, and in no way do I feel this represents our views as a whole," said Misty Meister, who called police. "It is upsetting due to the fact that we live in a community with families of different ethnic backgrounds, and this is a symbol of hate and intolerance."

The sheriff said the men had not broken any laws, and he said they took off their robes and put out the bonfire when deputies asked.

Although the men are unlikely to face any charges, the sheriff said the incident report had been handed over to the district attorney's office for review.

“It was done in very, very poor taste,” said Sheriff Jerry Niles. “It brings up bad images of things that 99.9 percent of Americans, especially Oklahomans, are adamantly against. We’re all Americans, born and raised here, and we have a responsibility to honor the Constitution and the rights of others and feelings of others.”

Cary Sharp, however, doesn't understand why anyone is upset by what he describes as a joke.

“This is ridiculous, really,” he said. “It was a Halloween night.”

According to Ukraine's armed forces, Russia's military is circulating a document called "Conclusions of the war with NATO in Ukraine," which declares that 5 million Russian troops must be deployed in order for Russia to win, Ukrayinska Pravda reports.

During a briefing, deputy head of the Main Operative Directorate of the General Staff of the Armed Forces of Ukraine, Oleksii Hromov, said that the documents says the main problems of the Russian occupying forces are "the commanders’ inability to command troops, low level of discipline and military training, obsolescence of armament and military equipment, commanders’ inability to make decisions without obligatorily coordinating them with higher command etc."

A Canadian couple rented their RV to a woman who then gave it to so-called "QAnon Queen" Romana Didulo, who later abandoned it badly damaged and needing thousands of dollars in repairs.

Mike and Vicki LeBlanc rented the motor home to a woman they met on Facebook and then discovered it was being used by Didulo, whom they'd never heard of before, and they began following her journey in their vehicle on Telegram, and a payment dispute broke out when the RV's tires needed replacement, reported Vice.