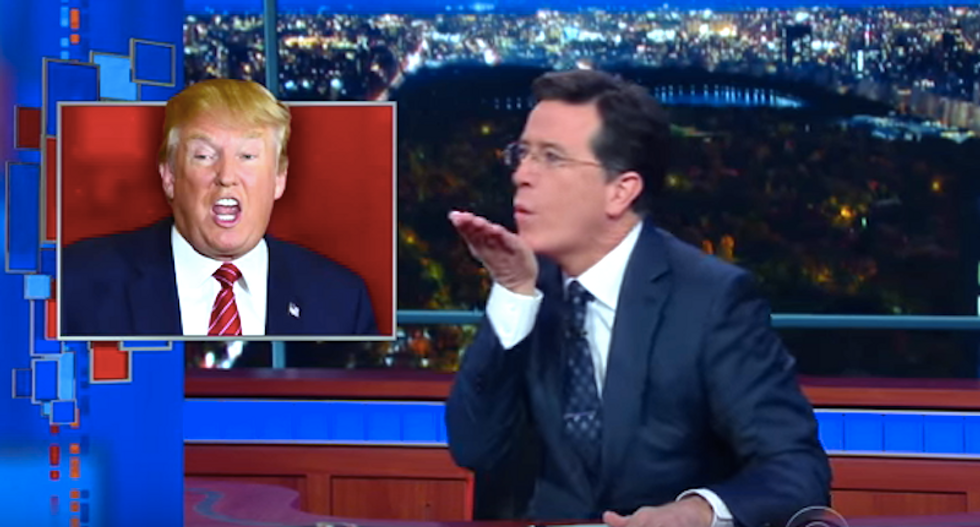 Donald Trump is a comedian's dream -- a ridiculous but famous person whose fatuous claims and haughty persona are making a mockery of the political process -- and Stephen Colbert is thankful for that.

The Republican presidential frontrunner claimed last week that he saw "thousands and thousands" of Muslims cheering the destruction of the World Trade Center on 9/11, although police and news organizations can find no evidence that such an event took place.

But Trump has spent this week defending his dubious claims, insisting that -- although he could not remember where he had seen the celebration -- he was certain he had witnessed it because he has, in his own words, "the world's greatest memory."

"That's right," Colbert said. "He can't remember exactly where he saw that video, but he can remember that he has 'the world's greatest memory.'"

Trump can also predict the future, according to the candidate himself -- who has repeatedly bragged in recent days that he had "mentioned" in a 2000 book that Osama bin Laden was a "bad guy" who was "going to do damage to our country."

Colbert pointed out that Trump's book was published the same year bin Laden was linked to the bombing of the U.S.S. Cole, two years after the al Qaeda leader was indicted for the embassy bombings that killed 224 people in Tanzania and Kenya and seven years after he was implicated in a previous bombing of the World Trade Center.

"That's spooky," Colbert said. "It's like Trump has some kind of, like, fifth sense that lets him see what's in newspapers and on TVs."

"NostraDonald is not the only one with this power," Colbert added, setting a candle on his desk as the studio lights were dimmed. "Tonight I will attempt to predict the predictable. I will now commune with the occult powers so I may know the known."

Colbert predicted that next year would bring an iPhone 7, followed quickly by an iPhone 7s, and he also foresaw a frozen yogurt shop opening in your neighborhood that would close within a year.

Author James Patterson will publish a book next year that may be purchased at the airport, Colbert foretold.

He predicted the weather would soon grow colder, followed by a warming trend in the spring and a heat wave in the summer.

Colbert then picked up a newspaper and read upcoming showtimes for "The Hunger Games: Mockingjay, Part 2," and he prophesied, popping open a Snapple and reading the underside of the bottlecap, that peace in the Middle East was "pretty darn unlikely."

He began manipulating one of those origami fortune tellers and predicted that, no matter what Trump said, he would probably continue doing well in the polls.