Analysis: Only one meteorologist in entire US linked 'climate change' to record hot Christmas 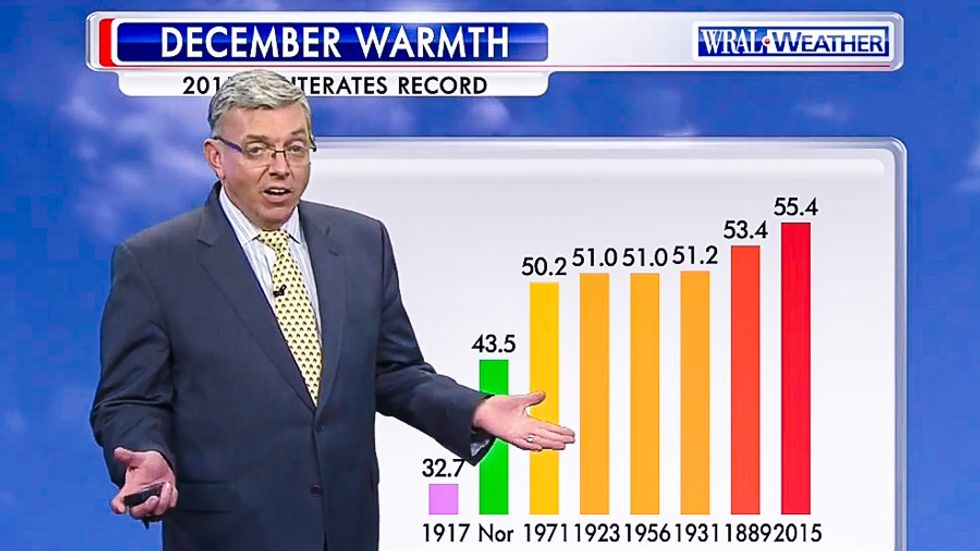 A Raw Story analysis of thousands of TV weather forecasts in the United States found that only one meteorologist was willing to concede that the record breaking temperatures over the Christmas holiday could be linked to climate change.

The National Weather Service reported that over two dozen cities in the Eastern U.S. set record high temperatures on Christmas day. And during the first 27 days of December, about 10,000 record daily highs and record warm lows were set across the U.S.

A Raw Story search of broadcast and cable news weather forecasts between Dec. 21 and Dec. 29 (via TVEyes) revealed that Steve MacLaughlin of WTAE was the only meteorologist to note that the weather patterns had been "enhanced by climate change" and El Niño.

In fact, a number of meteorologists went out of their way to explain why the high temperatures could not be tied to climate change.

WABC's Jeff Smith agreed that El Niño played a role, but dismissed a link to climate change, saying that "you can never really blame one weather event, including a really warm month or two, on global warming."

"I could sit here and say that this is proof of the fact that there's global warming going on -- no, I can't," the North Carolina-based meteorologist told viewers on Monday. "Number one, for those of us in the East that are burning up right now, over in the West, there's all sorts of heavy snow. So, they could use the same irresponsible argument on that side of the fence as I could on this one."

But meteorologists outside the U.S. were found to regularly connect climate change to the record-breaking temperatures.

Weather reporter Anwar Knight of CTV began his forecast on Tuesday by offering a candid opinion about the connection between climate and weather.

"I'm in the camp where it's both man made climate change and of course El Niño," he explained. "We have seen extremes we haven't seen in a long time."

“We have a situation where no one in regular television will say the phrase ‘climate change,'” Nye lamented. “Nobody will mention this phrase. But the world’s getting warmer so when there’s an El Niño event, which is where the surface of the Pacific Ocean gets a little warmer, yes, you get these two things here in North America. You get more moisture in the atmosphere out west, which generally leads to more snow, which is what we have.”

“And then you get the warm weather back east,” he added. “Since there’s more heat energy in the atmosphere, these two phenomena are amplified.”