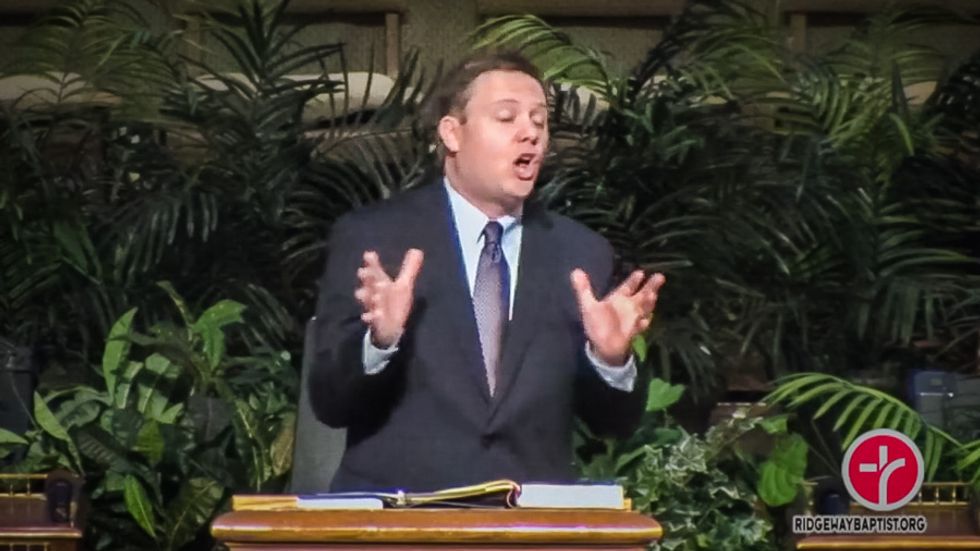 Dr. Ashley E. Ray, senior pastor of Ridgeway Baptist Church of Memphis, told his congregation on Sunday that women needed to submit to their husbands in all things, and that the "feminist rebellion" was responsible for many of the problems the country was facing.

"There is a divine hierarchy in marriage," Ray explained, reading from the book of Ephesians. "Wives submit to your own husbands as to the Lord. For the husband is the head of the wife, as also Christ is head of the church."

And then he added a message from the book of Timothy: "I do not permit a woman to teach or to have authority over a man, but to be in silence."

According to Ray, the push for transgender rights in Houston was a symptom of women failing to submit to men.

"The mayor of Houston says that her crowning achievement as mayor will be their city ordinance of equal rights and the abolishment of men's and women's restrooms," he opined. "You say, well, that's terrible! I would never!"

"But you know where all that started," Ray said. "All that started in people saying, 'I know what the Bible says but... that's just for that culture, that patriarchal society back in that day and we've come so far.' Yes, we have come so far. God help us. God have mercy upon us."

"And some of this problem in which we find ourselves today started with the feminist rebellion," he continued. "That's not to say patriarchalism is the thing, that's not to say traditions and men mistreating women and women getting less pay for the same work, I'm not condoning any of that."

Ray argued that "the word of God does not teach patriarchalism per se," but he said that it also did not "teach egalitarianism" and "mutual submission" between men and women.

"There is, whether you like it or not, a divine hierarchy in marriage," he added. "Wives must submit to their husbands, that will bring harmony."

Watch the video below from Ridgeway Baptist Church of Memphis, broadcast Dec. 6, 2015.