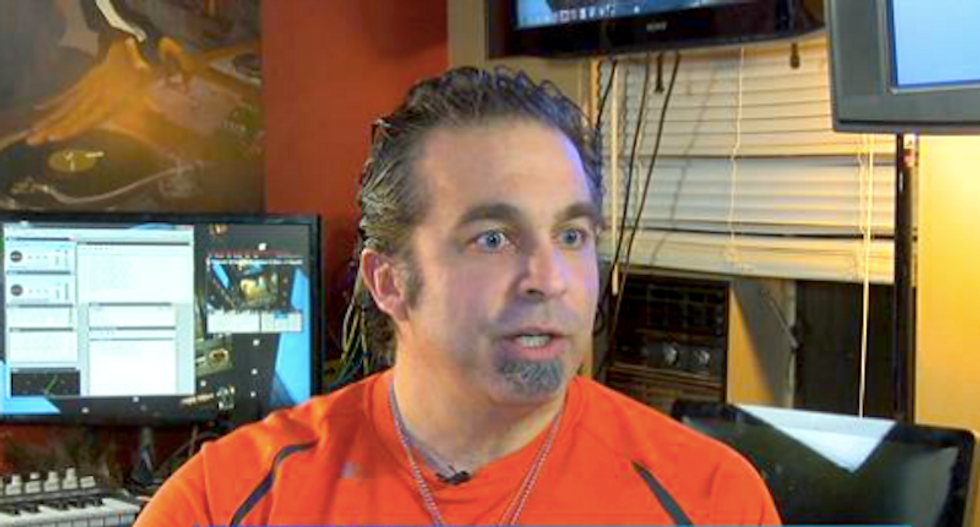 A conservative broadcaster who once threatened sexual violence against Hillary Clinton was arrested on a weapons charge in Ohio after he was mistaken for a suspect on the terrorist watch list.

Pete Santilli was stopped Friday afternoon in Newtown after police spotted him driving slowly -- 20 mph in a posted 50 mph zone -- and suspected him of texting while driving reported the Cincinnati Enquirer.

Officers detained Santilli and a woman riding in his SUV after one of their names was spotted on a national terror watch list, but police determined after about 45 minutes that the names were similar but did not belong to the same person.

Officers found a loaded 9 mm Smith and Wesson handgun in a bag between the passenger's feet while searching the vehicle.

The 50-year-old Santilli, who recently moved to Ohio from California, was charged with illegally carrying a concealed weapon without a permit.

The woman, who is from Ohio, was not charged.

The conservative broadcaster, who frequently hosts militia leaders and other right-wing extremists on his "Off the Hook in the Morning" program, said the police chief conducted the traffic stop and arrest with appropriate professional courtesy.

“He was extremely professional, constitutional -- he was very, very courteous when he pulled me over,” Santilli said.

He said the situation became tense after police spotted his name on the terror watch list.

“He pulled out his weapon immediately, and I was immediately staring down the barrel of a 45-caliber weapon," Santilli said. "He was very, very concerned. He was visibly concerned, as well. He said 'hands up.' I was extremely compliant.”

Santilli, who said he has received death threats from his political enemies, said he doesn't think it was an accident that his name was found on the watch list.

The police chief who conducted the stop, however, said the investigation turned out to be a simple case of mistaken identity.

"Similar names, just misread -- and that's all there was," said Chief Thomas Synan, of Newtown police. "You're dealing with a bunch of people who are trying to get information and run things through and double-check and triple-check, and they make sure everything is safe and everything is good."

"It is alarming, but he's been very understanding," Synan said. "And again, I think it goes back to this is part of what society is right now."

The Secret Service investigated Santilli in 2013 after he said he wanted to shoot Hillary Clinton “right in the vagina” for her involvement in several bizarre conspiracy theories.

Watch this interview with Santilli posted online by WXIX-TV: