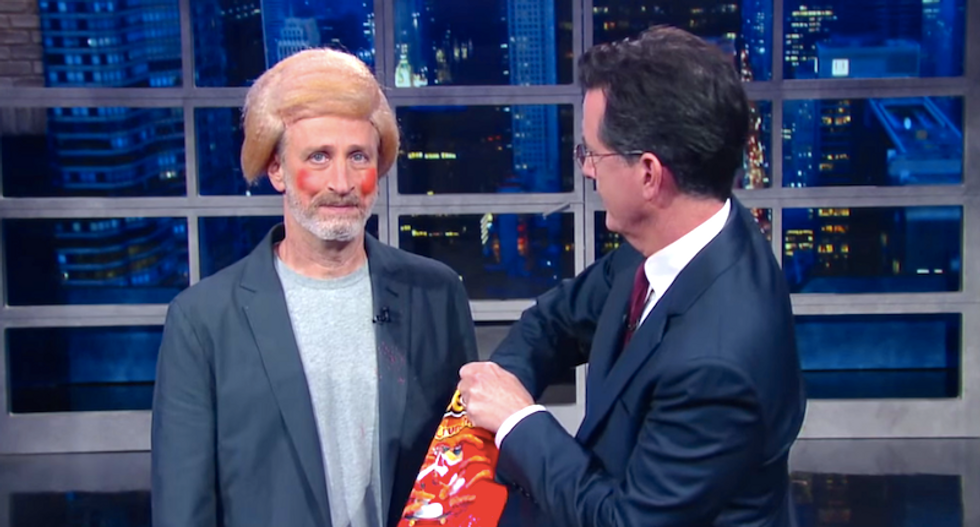 The former "Daily Show" host returned earlier this week to his old show to promote the Zadroga Act, which he said "everybody human" wanted to renew, and he turned up again on his former Comedy Central colleague's program to do the same.

Stewart started off by reminding the audience of the sacrifice those first responders made on Sept. 11, 2001, but Colbert cut him off and told him the pitch was boring.

"No one is going to listen to you unless you 'trump' it up a little bit," Colbert said. "Face it, the media won't pay attention to anything at all unless you are Donald Trump."

The "Late Show" host fetched a Donald Trump wig and insisted that Stewart wear it if he wanted the media to cover his plea to the U.S. Congress, and he also produced a bag of Cheetos and smeared some of the snack's signature orange dust on Stewart's face.

Colbert continued interrupting Stewart until he exaggerated his movements and adopted a brassy New York accent to deliver his legislative pitch.

"If I'm elected -- and I will be elected -- I will build a wall around politics, and I will make politics pay for it," he continued. "Tweet at your congressman with the hashtag #worstresponders. Tell them Donald said (to) pull up your big-boy pants and make America great again -- pass the Zadroga Act or I will glue Congress together, dip them in gold and wear them around my frigging neck -- classy, fantastic, sex, orange."