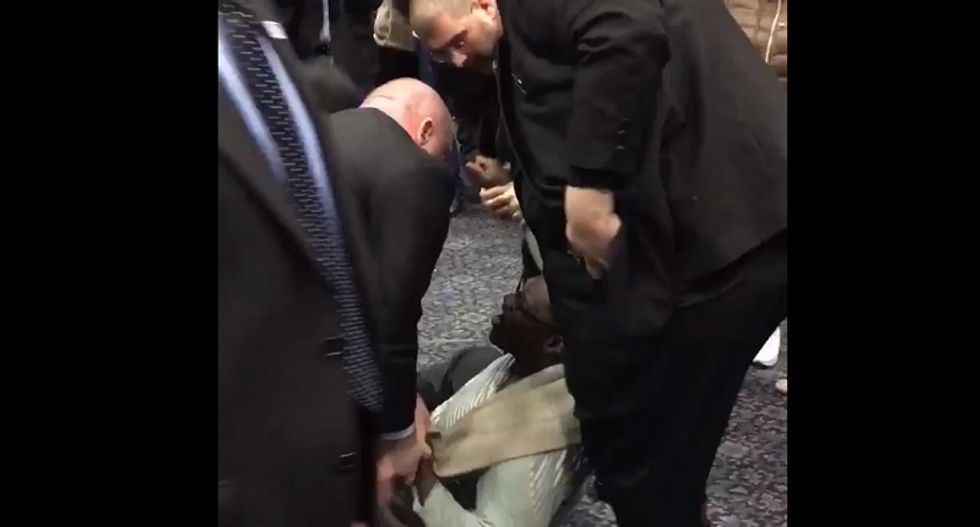 Add Monday night in Las Vegas to the increasingly long list of Donald Trump campaign events that have descended into violence.

BuzzFeed writer McKay Coppins attended the rally for the GOP presidential candidate and real estate mogul, reporting from the Westgate Hotel and Resort. Coppins posted video of a black protester being roughed up, with a supporter shouting, "Light that motherf*cker on fire!"

It gets worse: Trump supporter yells ‘Sieg heil!’ as protester violently dragged out of Vegas rally

The video, which Coppins posted to Twitter, shows an African-American man down on the ground, surrounded by burly security guards. A woman can be heard shouting, "Let him get up!" while a man screams, "Get your hands off him!" Trump can be heard continuing to speak to the crowd during the scuffle. A police officer intervenes and pulls the man to his feet right before the video ends.

"Every time another activist gets dragged out of room, Trump berates reporters for taking pics," Coppins reports. 'They are terrible! The worst!' Crowd boos."

The violence has become commonplace. At Monday night's event, Coppins reports there were multiple scuffles. A second video shows a protester being dragged and pushed by security.

Earlier this week, video emerged of security guards at a Trump rally in Pennsylvania throwing activist Jamila Hammami onto the ground. Last month, an African-American man was beaten at a Birmingham, Alabama rally. In October, a Latino demonstrator was knocked to the ground and dragged by a Trump supporter in Florida.