WATCH: Carly Fiorina snarls at CNN host after he confronts her over Planned Parenthood smears 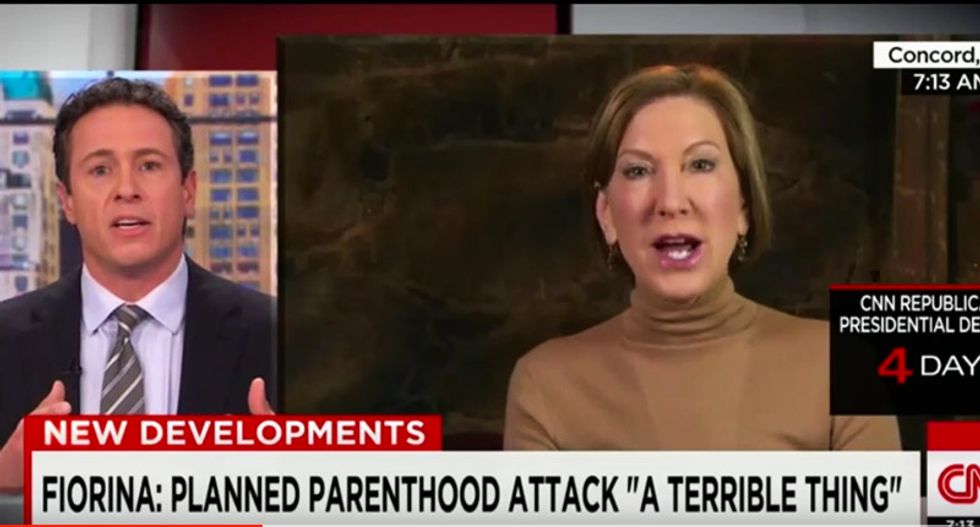 Aspiring 2016 GOP presidential candidate Carly Fiorina went from smiling to combative in a split-second during a contentious debate with  CNN host Chris Cuomo Friday morning, when he pressed her over the edited Planned Parenthood tapes.

Fiorina's campaign has stalled out since she claimed she saw footage in the disputed videos of a surgeon "harvesting the brain" of a fully formed fetus with "it's heart beating, its legs kicking," and this is not the first time she has battled with a news host over her assertions.

In late October, she went toe-to-toe with CNN's Alisyn Camerota, saying, "Wow, Alisyn, I can’t believe we’re having this conversation. Honestly, it’s clear now, it’s very clear that Planned Parenthood is harvesting body parts. So clear that they had to announce that that they no longer take compensation for it."

On Friday's appearance with Cuomo, things turned ugly quickly after the host pressed the former CEO on her statements, linking them to the Colorado Springs shooter who killed three during an attack on Planned Parenthood.

“Do you feel any sense of regret about how you characterized what was going on at Planned Parenthood after the attack in Colorado?” Cuomo asked. “Because of what the man said which seems as though he was influenced by some of the rhetoric coming out of you and others that painted a very ugly picture and unfair one about Planned Parenthood.”

“Oh, please. Really, Chris?” Fiorina replied, before again restating that the videos were not edited.

When Cuomo corrected her saying "Of course they were edited. Let's be careful about what we're saying," Fiorina snapped.

After Cuomo pointed out that Planned Parenthood shooter Robert Lewis Dear was responding to the videos, Fiorina went off the rails, attacking the host as a journalist and saying no one in the "pro-life" movement celebrated the tragedy that claimed three lives.