Where did the word 'Taser' come from? It's a weapon used to subdue ‘savage’ Africans in century-old sci-fi novel 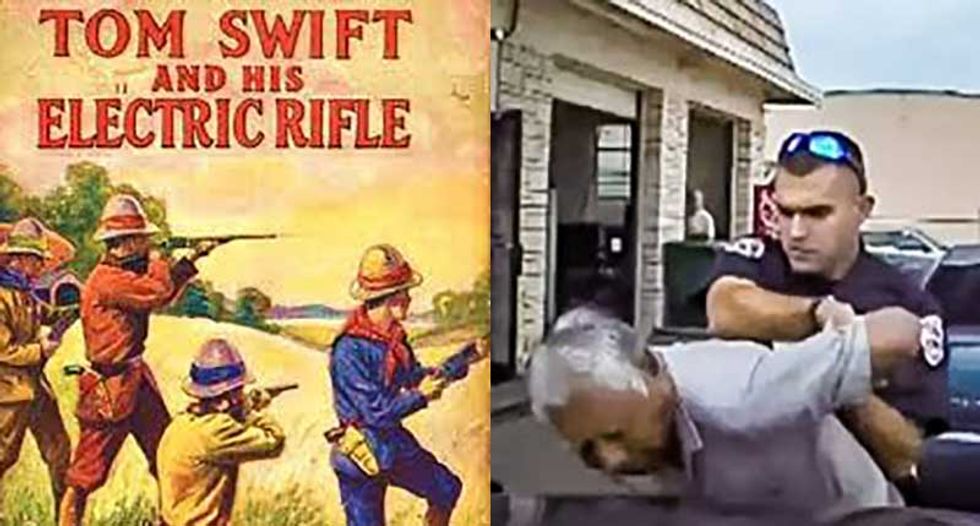 Most people, asked to identify the most universal shift in law enforcement over the past 15 years, would likely think of militarization, calls for community policing or perhaps the slow decline of “broken windows”.

But from the turn of the millennium to date, arguably no development has been more widespread in law enforcement than the adoption of so called “less-lethal” Electric Control Devices (ECD), which many people know by the name of their most prolific manufacturer: Taser International. The company currently supplies their weapons to 17,800 of the United States’ roughly 18,000 law enforcement agencies.

The brand name Taser has become as synonymous with these devices as Kleenex or Xerox have to photocopies and tissues – a quirk of language known as a “proprietary eponym”. The word has even become a verb, as people commonly speak of being “tased” or “tasered”.

The word Taser, though, didn’t start with the company: it’s actually a loose acronym of the book Tom Swift and His Electric Rifle . Jack Cover, the inventor of the modern ECW, named his prototype after the young adult Sci-Fi novel he loved, and the very idea for a less-lethal electric gun was largely inspired by the fictional one described in the book.

And while this quirky history is known among some in law enforcement and engineering circles, the innocence with which it’s told – a curious inventor culling inspiration from the literature of his youth – belies a more sinister truth: the book itself is boldly racist.

Tom Swift and His Electric Rifle, published in New York in 1911 under the pen name Victor Appleton, is typical of the literature of its time: an imperialist adventure tale set against the backdrop of a wild and dark African continent. In it, the protagonist, Tom Swift, develops an electric rifle – a totally novel idea in 1911 – and decides to test it in Africa in the hunt for ivory.

Africa, in the context of the book, exists only as a frontier of underexploited resources ripe for the wealth accumulation of white men daring enough to attempt. “Elephant shooting in Africa! My! With my new electric rifle … what a fellow couldn’t do in the dark continent!”

“With the price of ivory soaring,” says Swift’s veteran hunting companion, “there’s a chance for us all to get a lot of money.”

While this unabashed entrepreneurial imperialism tends to read as a relic of a bygone age, today, disproportionately white police departments in places like Ferguson often function similarly as the adventurers sent to do the dangerous work of this kind of wealth generation. Like in the book, black communities are often seen not as dynamic places where people live lives, but as sites for plunder.

Take, for example, the Department of Justice’s March report on the prevalence of predatory, revenue-based policing in St. Louis County : entire municipalities there, as elsewhere in the US, float their operating budgets and justify their own existence on the racially biased extraction of statutory fees from primarily black residents. This scheme has only begun to decline because of the protests and organizing that defined Ferguson in the wake of Mike Brown’s death.

In the book as in America today, the black people are rendered as either passive, simple and child-like or animalistic and capable of unimaginable violence. They are described in the book at various points as “hideous in their savagery, wearing only the loin cloth, and with their kinky hair stuck full of sticks, and as “wild, savage and ferocious ... like little red apes”.

Swift and his travel companions quickly determine the blacks, scarcely human, need to be controlled, guided or killed as determined by the more “civilized” white outsiders.

Consider, then, how quickly the black people of Ferguson were rendered something less than fully human in the wake of Mike Brown’s killing: an on-duty Ferguson police officer , a former NYPD commissioner and a popular actor all spared no time in invoking the discourse of “animals” in reference to black protesters. Near and far, incredulous commentators sought to cast the police as the sole defenders of black communities, and the only thing standing between those communities and self-destruction.

“White police officers wouldn’t be there if you weren’t killing each other,” former New York Mayor Rudy Giuliani said on Meet the Press last November. Echoing Swift’s rank paternalism, he later added “I probably saved more black lives as mayor of New York City than any mayor in the history of this city.”

In the book, when Swift and his companions proudly use their advanced weapons – particularly Swift’s electric rifle – to dispatch with an incoming buffalo stampede, they too happily celebrate themselves as saviors.

“Had it not been for the white men, the native village, which consisted of only frail huts, would have been completely wiped out by the animals,” the novel reads.

But as recent campus activism in places like Harvard and Princeton have demonstrated, there is real value in coming to terms with the bigotry embedded in the seemingly innocuous names and symbols of even our most ordinary, and aspirationally color-blind institutions.

Being aware of the history of the word Taser should make us pause and consider that, every day, predominantly white police officers walk into predominantly black communities armed with weapons first imagined in a book in which “civilized” whites entered the black wilds for the purpose of plunder, only to cast themselves as the saviors of the natives. It isn’t meaningless that today that sequence sometimes appears to persist in reverse.