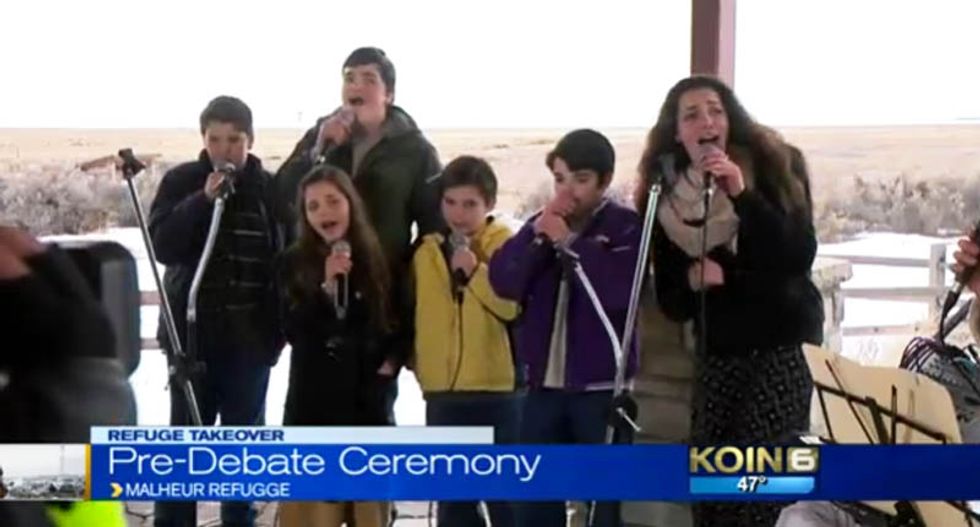 A Kansas mom who took her singing kids to entertain the armed militants at the occupied wildlife refuge in Oregon once had a son taken from her after he ran away because he was "unhappy" with the "wholesome and pure path" she had planned for him.

According to the Kansas City Star, Odalis Sharp, of Auburn, Kan., performed on Saturday at the Malheur National Wildlife Refuge, currently held by armed occupiers led by Ammon Bundy.

The Kansas mom also took her singing brood to the Nevada Bundy Ranch in 2014, when many of the same militants were engaged in an armed uprising against the federal government.

“We’re here to sing for the Lord,” Sharp told the appreciative Oregon militants. “This is a very worthwhile cause, and we just hope to make a difference and we hope to just be able to bless the hearts of the people through the songs."

According to the Star, the single mother of 10 had one of her sons taken from her over neglect charges after he ran away from home. At a hearing she stated that he was unhappy with "the right, wholesome and pure path in which I was leading him -- in which God was leading us.”

The son was placed in foster care, with his mother saying the system corrupted him -- adding that he then ended up “in all kinds of trouble.”

Introduced by occupier and radio host Pete Santilli, the family regaled the armed militants with a combination of religious and patriotic songs including, “Amazing Grace,” “Mary Did You Know?” and the “Star-Spangled Banner.”

For an encore they performed an upbeat version of "“This Land is Your Land,” written by anti-capitalist Woody Guthrie.

On the video taken of the performance, Sharp said she was contacted almost a month ago to see if she and the family would be interested in performing during the occupation.

Critics of the visit were dismayed at the idea of taking children into an armed occupation.

“You have these impressionable youth that are interacting with these extremists, and they look up to them as some sort of folk heroes when in reality they’re criminals,” said Daryl Johnson, a former senior analyst with Homeland Security. “What type of example is that setting? It’s raising the next generation of extremists.”

Watch video of the family at Malheur below via KOIN:

Watch a video of the family singing at Bundy Ranch in 2014: