Seth Meyers mocks militia cries for help: Who wants to live 'in the woods with some heavily armed strangers?' 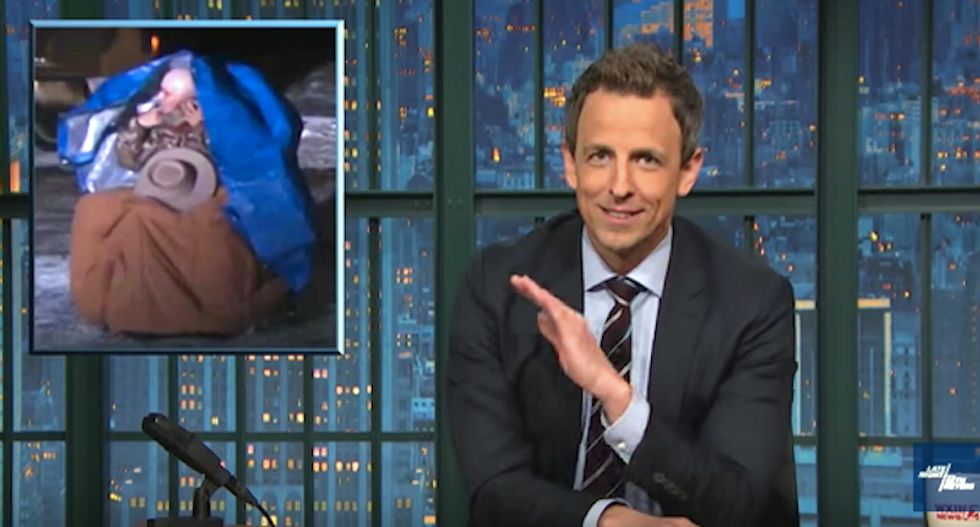 Seth Meyers ridiculed the armed militants hiding under tarps and issuing demands and calls for assistance at an Oregon nature preserve.

The "Late Night" host said he sympathized with the father-and-son rancher duo who were sent back to prison after a judge determined their term had not been long enough, saying the situation raised some important questions about mandatory minimum sentences.

But Meyers said the self-described militiamen had trampled all over that issue with their poorly planned and clumsily executed plot.

"Clearly, the militia's plan is not super thought-out," he said.

Meyers, like anyone else who watched the segment, was highly amused by the spectacle of LaVoy Finicum, a 55-year-old militant who hid under a blue tarp with his rifle during an interview with MSNBC.

"That's right -- there's a dude under a tarp, sitting in a rocking chair, holding a rifle," Meyers marveled. "That sounds like a guess in a game of 'Militia Clue.'"

The militant said he was hiding because authorities had issued a warrant for his arrest, but he refuses to accept the warrant and insisted he would fight to the death if police tried to take him into custody.

Meyers said the out-of-state militants led by Ammon Bundy had tried -- but failed -- to recruit local supporters to join their occupation, but he said their pitch wasn't very appealing.

"So what was his strategy? To go knocking on doors, (saying,) 'Hey there, would you be interested in living in the woods with some heavily armed strangers?'" Meyers said. "LaVoy brought his tarp, so that'll be fun."

He showed a Facebook video shared by Arizona militia menaces Blaine Cooper and Jon Ritzheimer, who begged supporters to join them at the Malheur National Wildlife Preserve by promising lots of media exposure and nearby parking spaces.

"If your No. 1 concern about driving across the country to join a potentially violent armed occupation of a federal government building -- parking would be your No. 1 concern," Meyers said. "And they better validate, because that's tyranny."

He praised the Republican presidential candidates who had criticized the militants and urged them to surrender peacefully, but he ripped Rick Santorum -- still a candidate, apparently -- for comparing the militiamen to Occupy Wall Street protesters.

"You're comparing the armed militia to Occupy Wall Street?" Meyers said. "The militia has guns. The only weapon Occupy Wall Street ever had was drums. No one has ever yelled, 'Oh my god, he's got a drum.' -- even when those drums have been in their most dangerous formation, a circle."