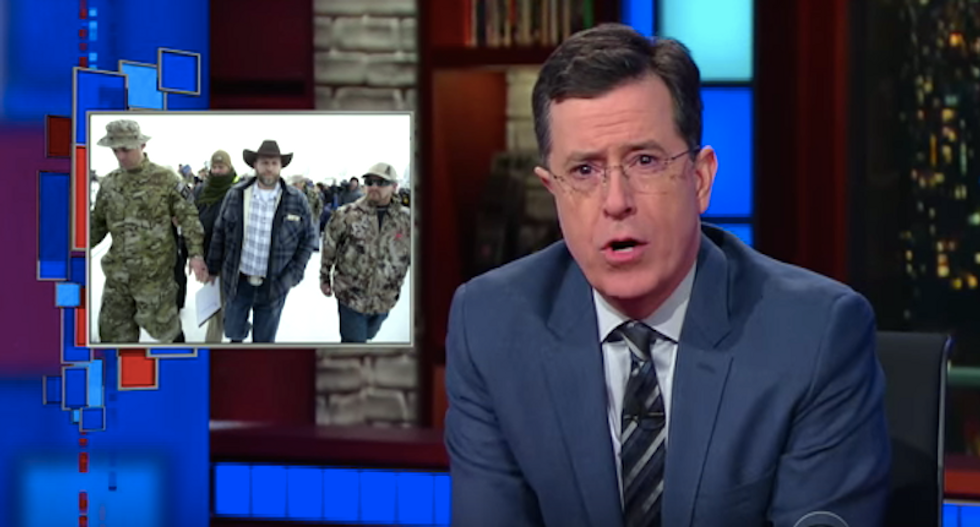 Stephen Colbert mocked a group of armed militants who have taken over an Oregon nature preserve in an attempt to trigger a revolution.

"I haven't seen this many angry, bearded men in Oregon since I referred to Blue Moon as a craft beer," Colbert said.

The "Late Show" host said the militants have made clear they're willing to die for their cause -- or from boredom, because the government has so far left them alone at the Malheur National Wildlife Refuge.

Colbert ridiculed the group's poor planning, which apparently did not include foodstuffs -- because the men put out a social media alert asking for "supplies or snacks or anything."

"What heroic, go-it-alone mountain men have always needed -- Go-Gurt, string cheese and Lunchables," he said. "I want you to hang in there, fellas, because help is on the way.

Colbert suggested the government just let them stay forever at the wildlife refuge, which he said could be renamed the Ammon Bundy Preserve for the Armed and Cranky.

"These confused, fragile, heavily armed creatures need someplace to live where civilization won't upset them," he said. "They're clearly endangered, although it's hard to know exactly how many there are because their camo is so good. Here's one standing between two bushes, I believe. Sadly, there's no hope of establishing a breeding program because, frankly, it's a bit of a sausage fest."