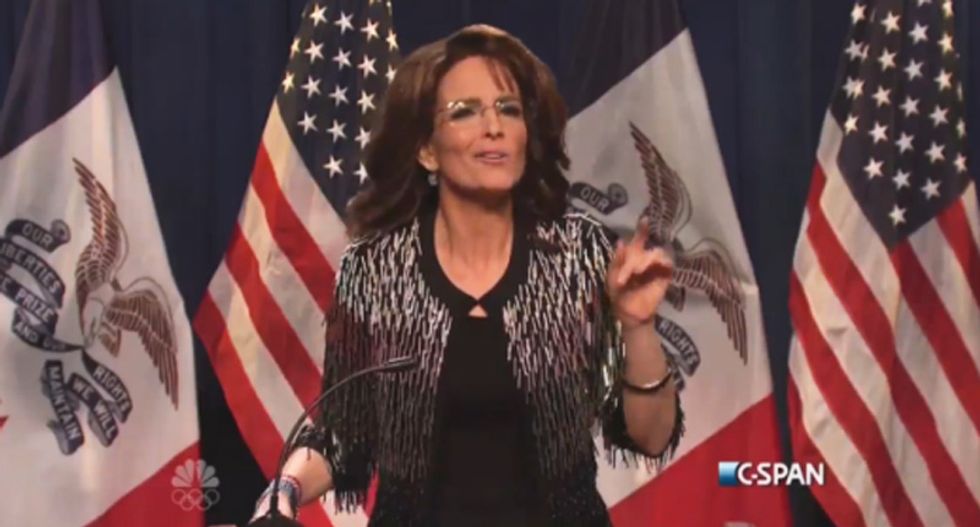 To the surprise of no one, Tina Fey returned to SNL on Saturday night to reprise her dead-on impersonation of Sarah Palin, mocking the frantic and crazed endorsement speech the ex-VP candidate gave in Iowa earlier this week for Donald Trump.

Introduced by Darrell Hammond’s Trump, Fey began by saying she was taking a break from her "full time career of writin' things on Facebook" to endorse the next president of the United States, Donald J. Trump.

Cutting to Trump, he called her "The total package. Smart. Legs. Yelling. Everything. I haven't seen a woman this impressive since Jeb Bush."

Fey's Palin noted, "I'm here because we Americans are struggling. So many of us have lost our jobs at the factory or our reality shows about Alaska. We've seen our own children targeted by the police for no reason other than they committed some crimes."

Then Fey launched into a riff on Palin's sing-songy, rhyming babbling from the Iowa endorsement speech, including "a rock and roller, holy roller, pushing stroller, pro bowler with an abscessed molar."

"She's a firecracker. She's a real pistol," Trump said to the camera before pausing and adding a knowing smile, "She's crazy, isn't she?"