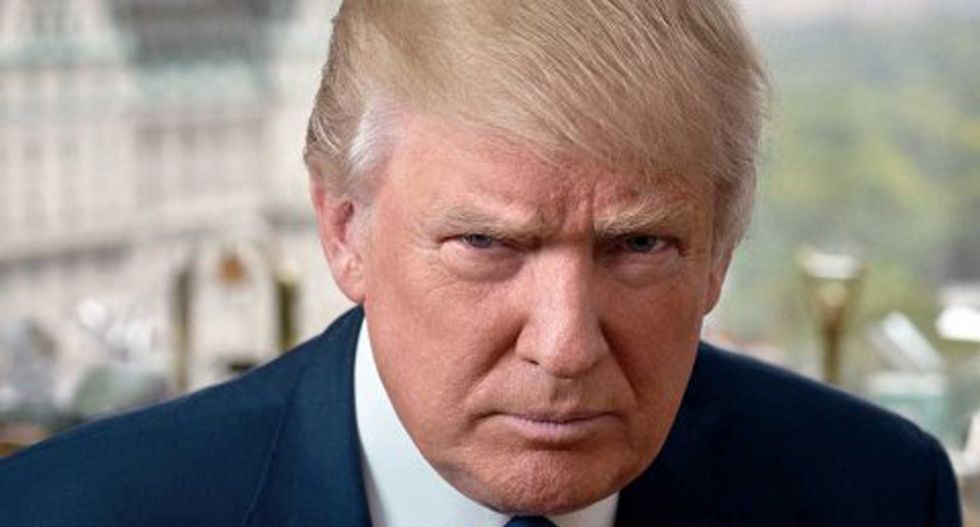 Trump released his latest comically deceptive campaign ad, and as usual, all the mainstream cable outlets raced to be the first to air his fear-mongering garbage under the guise of relevant news analysis. Keep in mind that Trump doesn't even need to pay networks to play his ad since they already do it for free.

As Mediaite's Tommy Christopher explains perfectly, journalists are supposed to cover and repudiate the claims made in the ad. But often times, they analysis focuses on whether or not it will be successful in getting through to voters, which doesn't help educate the public much when politicians deceive them. Christopher notes:

"The 'analysis' will likely continue, as it has, to consist entirely of the ad’s impact, rather than its content. This is pure dissemination, and it would cost any other candidate more than they could ever afford."

The ad is everything you would expect from an ignorant xenophobic bigot like Trump. He wants to keep all Muslims out of the country, and has unrealistic fantasies about building a border fence Mexico would supposedly pay for. There were two blatant lies that went unchecked until Politifact conducted the job that journalists are supposed to do.

In one scene, Trump's ad shows dozens of people running across a border while a narrator utters "He'll stop illegal immigration by building a wall on our southern border that Mexico will pay for." The narration purposely makes it seem as though the footage depicts Mexicans, but the reality couldn't be further from the truth. Politifact notes the video is actually from Morocco in 2014. In fact, they were able to trace the footage back to the Italian television network RepubblicaTV, which posted footage of migrants crossing the border into Melilla, one of two enclaves on the Moroccan coast that are held by Spain.

The second lie in the ad is what made Trump a popular Republican candidate in the first place - this whole notion that the U.S. is grappling with an influx of undocumented Mexican immigrants. The reality is that there are more Mexicans leaving the U.S. than coming in.

A recent Pew Report reveals that from 2009 to 2014, there was a net loss of 140,000 Mexican immigrants from the U.S. One million Mexican migrants and their children left the country for Mexico, while just over 860,000 left Mexico for the U.S. So Trump continues to deceive Americans into thinking Mexican immigrants are "pouring in" while mainstream journalists neglect to fact-check or challenge his misinformation.

The U.S. has certain advertising laws that apply to everyone in the country in order to prevent the public from spending money on useless products. But what about useless politicians?

The government already has advertising laws that impact private companies referred to as "truth-in-advertising" regulations. The FTC states that it looks for "advertising claims that can affect consumers’ health or their pocketbooks – claims about food, over-the-counter drugs, dietary supplements, alcohol, and tobacco and on conduct related to high-tech products and the Internet." But the agency doesn't look for lies in political ads, because those are the only types of ads that are exempt from mandatory truth telling.

Trump accuses his opponents of lying, but maybe it's just him projecting. Politicians do lie, but the deception, immaturity, ignorance, and hatred demonstrated by Trump is hard to match.