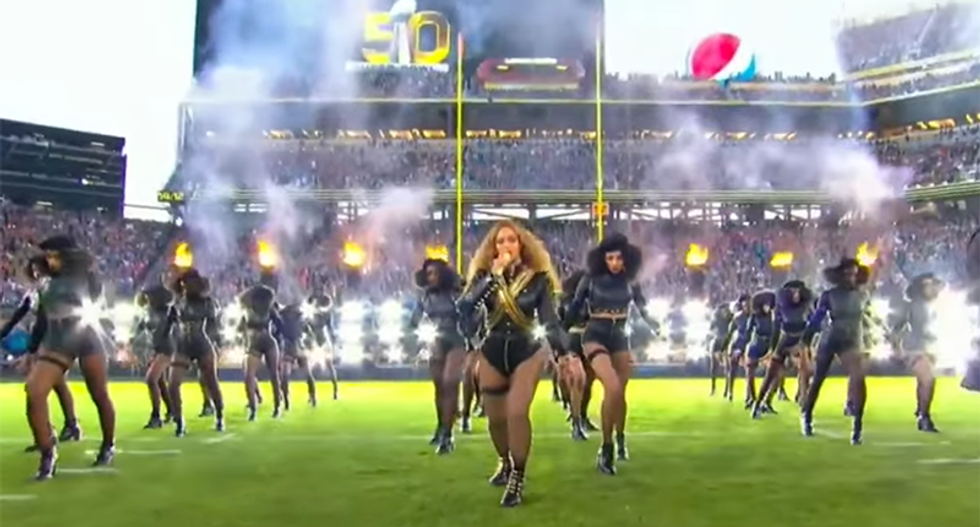 During a Super Bowl party in Washington at the J.W. Marriott members of the National Sheriffs' Association turned off the television in protest during Sunday's halftime show when Beyoncé came on the screen to sing her latest song "Formation," the Washington Examiner reports.

The music video of the tune pays homage to, among other things, those killed in New Orleans in the wake of Hurricane Katrina. Many are calling the song and her performance a black power anthem in part because the video features a spray painted wall reading "stop shooting us" in reference to the numerous cases of police brutality on people of color.

Chicago Code BLUE joined in the boycott and posted a rejection of Beyoncé on Facebook and encouraged others to boycott the show. A Facebook page was also started calling for a full boycott of the singer with an avatar that says "Blue Lives Matter."

The performance, Sunday featured a chorus of African American dancers with berets that were reminiscent of the Black Panther Party which was founded 50 years prior in Oakland, just over the Bay from the Super Bowl. Before the performance, some of the dancers took a photo with fists raised, holding a sign that read "Justice for Mario Woods." Woods was a young black man with a knife who was surrounded by police and shot.

After the halftime show the dancers took a photo once more with their fists raised in the air in solidarity.

Beyoncés dancers in black berets at #SB50 paying homage to the Black Panthers 50 years after their #formation in '66 https://t.co/YXpzBkkm6s
— Dream Defenders (@Dream Defenders) 1454899162.0

While there were so many positive and affirming messages for those viewers at home, one woman took her rage straight to Facebook. "As the wife of a police officer, I am offended by this entire video," a user posted on Beyoncé's fan page.

The Sheriffs weren't the only ones who objected to the performance, former New York Mayor Rudy Giuliani appeared on Monday's Fox and Friends to trash the singer and the show.

"At the end, we find out Beyonce dressed up in a tribute to the Black Panthers, went to a Malcolm X formation. And the song, the lyrics, which I couldn’t make out a syllable, were basically telling cops to stop shooting blacks!” Fox News host Brian Kilmeade said.

Tidal, the music streaming service owned by owned by Beyonce's husband Jay-Z announced last week that they would be donating $1.5 million to the Black Lives Matter movement among other groups that fight for civil rights.