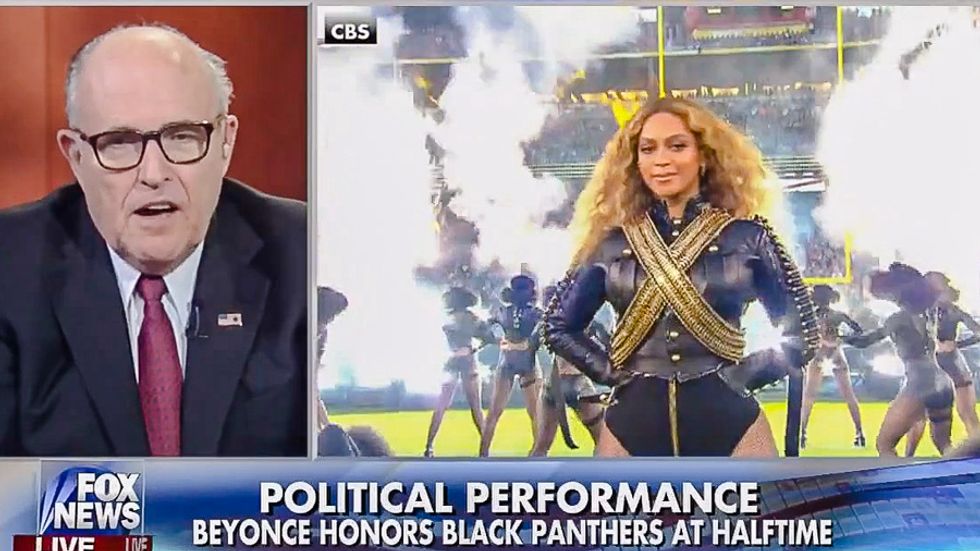 The hosts of Fox & Friends and former New York Mayor Rudy Giuliani accused Beyonce of not providing "wholesome" entertainment at Sunday's Super Bowl 50 because her performance was a tribute to Black Lives Matter and the Black Panthers.

"I couldn't really make out what Beyonce was saying," Fox News host Brian Kilmeade admitted on Monday. "But at the end, we find out Beyonce dressed up in a tribute to the Black Panthers, went to a Malcolm X formation. And the song, the lyrics, which I couldn't make out a syllable, were basically telling cops to stop shooting blacks!"

In a later segment, co-host Anna Kooiman told Giuliani that Beyonce saluted the Black Lives Matter movement even though she had gotten a police escort for the game.

See also: Here are 10 white women from the 60s who were more risqué than Beyoncé

"I think it was outrageous," Giuliani opined. "The halftime show I thought was ridiculous anyway, I don't know what the heck it was. A bunch of people like bouncing around and doing strange things. I actually don't even know why we have this."

"I thought it was really outrageous that she used it as a platform to attack police officers, who are the people who protect her," he continued. "What we should be doing in the African-American community and all communities is build up respect for police officers."

After recalling Janet Jackson's so-called "wardrobe malfunction" at a prior Super Bowl, Kilmeade argued that the NFL had a responsibility to censor Beyonce's performance.

"Didn't they go and review this and say, wait a second?" he complained.

"This is a political position and she's probably going to take advantage of it," Giuliani agreed. "You're talking to middle America when you have the Super Bowl. So if you're going to have entertainment, let's have decent, wholesome entertainment. And not use it as a platform to attack the people who put their lives at risk just to save us."