Colbert hilariously mocks the GOP and Rubio's new campaign slogan: 'Oh, you're such a catch?" 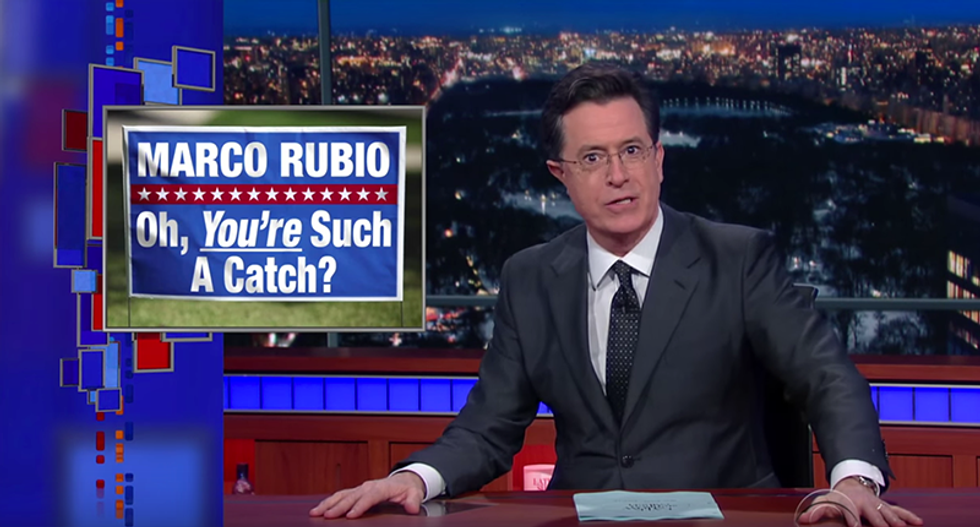 So Donald Trump won the Nevada Caucus and the GOP is moving from denial and fear to acceptance that he is going to be the next Republican nominee. Stephen Colbert had some fun mocking the Republican party on Wednesday night's "Late Show" for going all in on not their first choice or even their second choice, but Marco Rubio.

As he told his victory rally, Donald Trump won every demographic from young and old to highly educated to "poorly educated. I love the poorly educated," he admitted.

"I bet you do," Colbert joked. But that wasn't all. According to Colbert, Trump also won "Elvis impersonators, white tiger handlers, even master illusionists!" Trump won so many votes he scored more votes than Ted Cruz and Marco Rubio combined! Rubio couldn't even jump on Cruz's shoulder's with a giant trench coat and beat Trump.

"I'm not sure if I'm horrified or entertained," Colbert said. "It's like watching one of those nature documentaries where the python unhinges its jaw and slowly swallowed the capybara and then becomes President of the United States."

Now that Trump is "winning all of these primaries has caused the establishment republicans to realize that Trump is winning all these primaries," Colbert said before showing clips of GOP acceptance. "Like many other Las Vegas visitors, the GOP woke up this morning with a raging hangover wondering what the hell happened last night."

The whole thing is causing so much turmoil in a Republican party that is overwhelmed by the Tea Party. "This billionaire having his way with the election is shocking and unthinkable to the billionaires who have their way with our elections." Now they've realized they need to do something so they formed a super PAC headed by the family that owns the Chicago Cubs since the Cubs are so well-known for winning.

But they're not just relying on money, they're going all in on Marco Rubio, "a man who doesn't mind telling you he was not your first choice," Colbert explained before showing Rubio explaining he wasn't the first or second choice for many people. "He's just saying the election's not getting any younger and America needs to settle. He might not be the president of your dreams, but you'll learn to love him. It's all summed up in his powerful new campaign slogan, 'Marco Rubio: Oh you're such a catch?'"

Check out the video below for an amazing illusionist trick by Colbert: