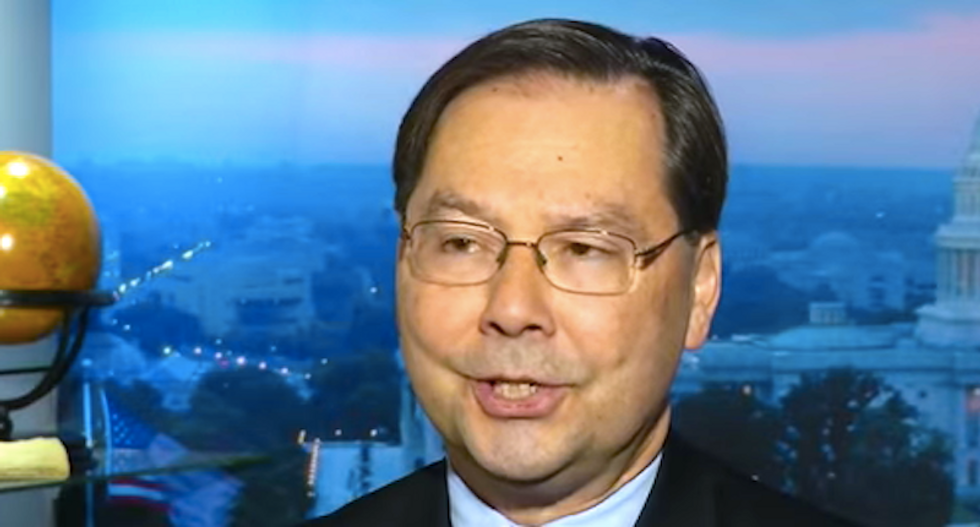 Another conservative lawyer is suggesting that Antonin Scalia should be allowed to decide U.S. Supreme Court cases from beyond the grave.

Hans von Spakovsky, a senior fellow at the conservative Heritage Foundation and a former Bush administration official, argued that Scalia's votes on some pending cases should be counted even after his Feb 13 death, reported Right Wing Watch.

The conservative legal activist said the late justice had already heard oral arguments in some cases before the court, including Friedrichs v. California Teachers Association, which could hobble public sector unions.

“After oral arguments before the court, the justices leave the courtroom and they go to a conference room in the Supreme Court building and they take a vote,” von Spakovsky said during the Feb. 15 interview.

“So that’s the point at which they know how a case is going to be decided and the chief justice then makes assignments of who will write the majority opinion and et cetera," von Spakovsky continued. "I think the chief justice has an absolute obligation to give credit to Scalia’s vote in those cases that have already been decided, even if he didn’t write his opinion yet, because they know how he would have voted.”

However, justices can and do change their minds after voting in those conferences -- as Roberts famously did when he upheld the Affordable Care Act.

That historic fact -- along with the general rule that "dead justices don't vote" -- was pointed out over the weekend to anti-government attorney Kory Langhofer, who also argued that Scalia should be able to enforce his conservative legal agenda from the afterlife.

Veteran Supreme Court attorney Roy Englert also made the same point shortly after Scalia's passing, saying the “vote of a deceased justices does not count.”

It's ironic that von Spakovsky would advocate for the voting rights of a dead jurist -- because he spent his years in the U.S. Justice Department under Bush promoting the mythical epidemic of dead voters.

Von Spakovsky, a frequent Fox News guest, is largely credited with turning the myth of widespread Democratic voter fraud -- including votes cast on behalf of the deceased -- into "Republican orthodoxy," reported the New Yorker.

Perhaps if this argument doesn't work, von Spakovsky can argue against the "one person, one vote" principle to justify giving a second vote to justices Clarence Thomas or Samuel Alito -- who have been more reliably conservative than Scalia in recent years.